TEHRAN, Iran (CNN) -- In an unprecedented move in Iranian politics, a reformist presidential candidate accused President Mahmoud Ahmadinejad of tainting the country's image by questioning the Holocaust and by wielding a reckless leadership style. 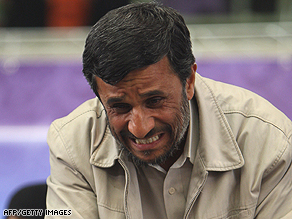 The frontrunners in Iran's presidential race clashed during a fiery debate broadcast to a national television audience on Wednesday evening.

The verbal jousting between Ahmadinejad and opponent Mir Hossein Mousavi -- a former prime minister and reformist candidate who poses a threat to the firebrand Iranian president -- lasted an hour and half.

Mousavi said Ahmadinejad's dictatorial ways have hurt Iran's image across the globe and could be a prelude to a dictatorship.

"There are two ways of confronting the country's problems," Mousavi said. "One is through a management style based on adventurism, instability, play-acting, exaggerations, wrongdoing, being secretive, self-importance, superficiality and ignoring the law. The second way is based on realism, respect, openness, collective wisdom and avoiding extremism."

He said Ahmadinejad's denials of the Holocaust had repulsed Iran's allies.

"This has greatly damaged us," Mousavi said.

The Iranian president called the Holocaust, in which six million Jews perished at the hands of the Nazis, "a big deception." Ahmadinejad also has lashed out at the United States and Israel, calling at various times for the end of Israel's existence as a Jewish state.

The outcome of the election will set the tone for Iran's policies on crucial issues, including its nuclear ambitions and the possibility of bilateral talks with Washington.

Wednesday night's event was the first of four debates that will pair two of the candidates against each other ahead of next week's presidential elections.

Ahmadinejad, known for his attacks against his foes, accused Mousavi of colluding with Iran's former presidents Mohammad Khatami and Akbar Hashemi Rafsanjani.

Ahmadinejad, seeking a second term in office, accused the two Iranian figures of mismanagement, corruption and the masterminding of a plot to force him from power.

"I have tolerated all the personal insults and lies for four years and I forgive those responsible for them," Ahmadinejad said. "But I do not have the authority to turn a blind eye when the people and the people's choice and their interests are insulted."

Ahmadinejad accused Mousavi and the two former leaders of standing against the Iranian nation and conspiring against him. Ahmadinejad said that, in the early days of his presidency, Rafsanjani sent a message to the king of a Persian Gulf state that said: "Do not worry. This government will fall within six months."

Hours after the debate, Ahmadinejad and Rafsanjani met at a ceremony commemorating the death of Imam Ruhollah Khomeini, the leader of the revolution that overthew the ruling monarchy in 1979 and established Iran as an Islamic republic.

The meeting was cordial, with Rafsanjani holding on to Ahmadinejad's arm throughout their talk, the semi-official Fars news agency said.

Rafsanjani, a powerful cleric who heads the Expediency Council and Assembly of Experts, remains an influential figure in Iran. He was president from 1989 to 1997 and then attempted to position himself in the political center in the 2005 elections, when he publicly favored a policy that would relax tensions with the United States. The two nations have had no diplomatic ties since the 1979 Islamic Revolution.

Rafsanjani lost to the ultra-conservative Ahmadinejad, who was then Tehran's mayor.

Ahmadinejad's accusations against the former Iranian presidents mark a change in traditional politics, in that he named them. Normally, charges are made via innuendo. Though the targets are clear, they go unnamed.

The change could indicate that he has the backing of Iran's supreme leader, Ayatollah Ali Khamenei. Analysts say that, without at least a nod from Khamenei, Ahmadinejad would not dare implicate members of Iran's powerful inner circle.

Outside the TV station, supporters of both candidates stayed well after the debate had ended, chanting slogans and not fully dispersing until 4 a.m., according to the semi-official Fars news agency.

CNN's Shirzad Bozorgmehr in Tehran contributed to this story.