Iranian election could be test for women's rights

TEHRAN, Iran (CNN) -- There's no doubt that Iran's election will be a major test for incumbent President Mahmoud Ahmadinejad. But many Iranian women hope the results will also shake the current status of women in the Islamic republic. 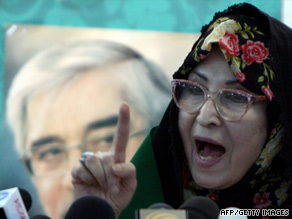 Whether her husband wins or loses Friday, Rahnavard has broken barriers for women just by appearing on the campaign trail with her husband, a rarity for political wives in Iran.

"We look at her, and we say, 'We want to be like her in the future,' " said Shakiba Shakerhosseie, an Iranian woman who packed into Tehran's indoor Azadi (Freedom) sports stadium along with nearly 12,000 others to hear Rahnavard speak in March.

Rahnavard is a mother of three, as well as an accomplished artist and academic. She has been compared to first ladies in the United States, including Michelle Obama, for her visible role in her husband's quest for the presidency.

"I am here to say that men and women are equal," Rahnavard said.

Iran became an Islamic republic in 1979 after the ruling monarchy was overthrown and Shah Mohammad Reza Pahlavi was forced into exile. The revolution also ended the ceremonial role of first lady that the last queen, Farah, enjoyed.

More women than men have voted in the past few elections, and Rahnavard has made a promise to her female supporters that their vote will count this time if Moussavi wins.

"We have made this promise to the women, and we will stand by it," she said.

Iranian women remain second-class citizens in criminal matters, divorce, child custody and inheritance cases, despite making up 65 percent of university students. Ahmadinejad's fundamentalist government has tried to make it easier for men to take more than one wife while restricting public sector careers for women.

This year, for the first time, the Guardian Council announced that a woman could legally be among the final candidate list. Out of the 42 women who registered, however, none was ultimately allowed to stand.

Even Zahra Eshraghi, granddaughter of revolutionary leader Ayatollah Khomeini, was banned from running for parliament as a reformist.

"For Ahmadinejad's government, women are just living things," Eshraghi said. "A woman is there to fill her husband's stomach and raise children."

Watch one analyst talk about women in Ahmadinejad's Iran »

Moussavi is not the only candidate calling for a stronger role for women in Iran. Mehdi Karroubi, the only cleric in the presidential race, has promised to campaign for women's rights. Hard-line conservative candidate Mohsen Rezaie also said he would have female ministers if he wins the election.

Political science professor Mohammad Marandi downplayed Rahnavard's impact on the outcome of Friday's election. He said she may win over reformists and women, but what will win the election is a solution to the floundering economy and a strong performance in the debates. iReport.com: Iranians rally in large numbers

"This is the first time after the revolution we see a lady behind the president," Farhad Mahmoudi said. "And this is why we're so happy, because we can have a first lady."

CNN's Reza Sayah and Christiane Amanpour contributed to this report