(CNN) -- Mohsen Rezaie may have little chance of winning Friday's presidential election in Iran, observers say, but they believe he's running with a purpose: getting rid of Mahmoud Ahmadinejad. 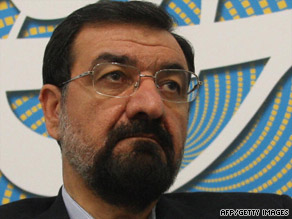 "He came there just to defeat Ahmadinejad. He didn't come to win," said Mehdi Khalaji, a senior fellow with the Washington Institute for Near East Policy.

Hardliners disappointed with Ahmadinejad and reformers eager for new leadership are both glad Rezaie is running, Karim Sadjadpour wrote in a recent article for the Carnegie Endowment for International Peace, where he is an associate.

"Intimidating in appearance and lacking in popular appeal, reformists are happy to have Rezaie in the race, believing he can take some of the votes from Ahmadinejad in the first round," Sadjadpour wrote.

Khalaji said the incumbent will lose votes at both ends of the political spectrum.

Watch how the campaign is a watershed for Iran »

"Look, everybody in this country wants Ahmadinejad out," Khalaji said, "except the Supreme Leader and his organizations."

Rezaie, no ally of Supreme Leader Ayatollah Sayyed Ali Khamenei, was a founder of the Revolutionary Guard in 1979 and its leader from 1981 to 1997, a period that included the devastating eight-year war with Iraq.

Many people blame Rezaie for prolonging the war and failing to achieve victory, Khalaji said.

In an interview this week in the Los Angeles Times, Rezaie said the conflict taught him "that war is a terrible thing, that we should do everything to avoid war."

"Look at what happened to us, the chemical weapons attacks on Iranian cities and Halabja [in Iraq]," he told the newspaper. "War is a terrible thing. I saw dead people and crushed children, families destroyed and fleeing from their homes, here in Iran but also there in Iraq.

Rezaie has been linked to terrorism. The 1983 bombing of the U.S. Marine barracks in Beirut, Lebanon, by Revolutionary Guard client Hezbollah occurred under his watch. The blast killed 241 Americans. Rezaie is one of several people indicted in Argentina for the 1994 bombing of Jewish and Israeli sites in Buenos Aires. He has denied responsibility for those attacks.

In the Los Angeles Times interview, Rezaie said he sees an opportunity for improving relations with the United States.

"I propose to put together a package of eight or nine topics that the U.S. and Iran would work toward," he told the paper. "What is important is to just start the talks. It can be on drug trafficking, it can be anything, but the idea is just to start some kind of dialogue. If we solve one or two problems, we're on our way."

Watch how the campaign has heated up at the end »

Rezaie is a member of Iran's Expediency Discernment Council, a "council of elders" from many parts of government and society whose job is to reconcile the needs of the state with the rulings of the Council of Guardians, the arbiter of Islamic law in Iran.

Rezaie was raised in a poor family in southern Iran and founded the Manssouroun, a paramilitary force that resisted the reign of the Shah, Khalaji said. That experience led directly to his role in founding the Revolutionary Guard, a force created by revolutionary leader Ayatollah Ruhollah Khomenei to protect against coup attempts by army officers who remained loyal to the Shah. The Revolutionary Guard eventually came to dominate the military.

In 1998, Rezaie's son Ahmad fled Iran and sought political asylum in the United States, but eventually was persuaded to return home and now is a wealthy businessman, Khalaji said.