(CNN) -- Members of the international community have reacted to the re-election of Mahmoud Ahmadinejad as president of Iran and the oppostion protests which have accompanied the result. 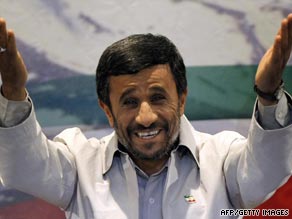 Mahmoud Ahmadinejad pictured at a rally held in Tehran Sunday to celebrate his re-election as Iranian president.

U.S. Secretary of State Hillary Clinton said in a statement Saturday: "We are monitoring the situation as it unfolds in Iran but we, like the rest of the world, are waiting and watching to see what the Iranian people decide.

"The United States has refrained from commenting on the election in Iran. We obviously hope that the outcome reflects the genuine will and desire of the Iranian people."

White House spokesman Robert Gibbs said Saturday the administration was "impressed by the vigorous debate and enthusiasm that this election generated, particularly among young Iranians."

U.S. Vice President Joe Biden, commenting on NBC's "Meet the Press" Sunday, said: "I have doubts, but withhold comment." He added that the Iranian government had suppressed crowds and limited free speech, which raised questions.

He also said that the strong showing by Ahmadinejad was "unlikely," based on pre-election analysis.

Israel's Deputy Prime Minister and Minister of Foreign Affairs Avigdor Liberman said in a statement that "the problem which Iran poses for the international community is not personal in nature, but derives from its policy.

"In any case, in light of Tehran's ongoing policy, and even more so after Ahmadinejad's re-election, the international community must continue to act uncompromisingly to prevent the nuclearization of Iran, and to halt its activity in support of terror organizations and undermining stability in the Middle East.

In a statement Saturday the EU Presidency said it was "concerned about alleged irregularities during the election process and post-electional violence that broke out immediately after the release of the official election results on 13 June 2009.

"The Presidency hopes that outcome of the Presidential elections will bring the opportunity to resume the dialogue on nuclear issue and clear up Iranian position in this regard. The Presidency expects the new Government of the Islamic Republic of Iran will take its responsibility towards international community and respect its international obligations."

UK Foreign Secretary David Miliband said Saturday that the UK government had "followed carefully, and admired, the passion and debate during the Iranian election campaign.

"We have also heard the concerns about the counting of ballots expressed by two of the candidates. This is a matter for the Iranian authorities to address. We will continue to follow developments. Our priority is that Iran engages with the concerns of the world community, above all on the issue of nuclear proliferation."

Fawzi Barhoum, spokesman for Hamas, the militant Palestinian movement backed by Iran, welcomed the results. He urged the world to respect Iranian democracy and accept the results of the elections.

The office of Afghan President Hamid Karzai said in a statement Sunday that he had congratulated Ahmadinejad on his victory.

It added that Karzai believed "relations between the two Muslim nations of Afghanistan and Iran expanded during Mr. Ahmadinejad's first term and hoped that these relations get stronger during his second term."

German Foreign Minister Frank-Walter Steinmeier told ARD Sunday that the Iranian ambassador in Berlin would be summoned to explain the treatment of protesters against the result.

"I have already prompted Iran, together with European colleagues today, to quickly shed light on what has happened there -- if one can take the announced election results there seriously or not," he added.

It said that they "called Ahmadinejad on the phone and congratulated him for his success in the election."

"We're troubled by reports of intimidation of opposition candidates' offices by security forces. We've asked our embassy officials in Tehran to closely monitor the situation, and Canada is calling on Iranian authorities to conduct fair and transparent counting of all ballots."

CNN's Shira Medding in Jerusalem and Greg Clary in Washington contributed to this report.