(CNN) -- Yemeni authorities have dispatched troops and helicopters to search for six remaining hostages after three of their fellow female captives were killed, Yemen's Embassy in the United States said Tuesday. 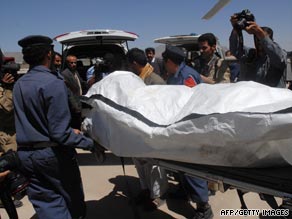 Yemeni military and medical staff carry the body of one of three killed hostages found in northern Yemen.

Five Germans -- including three children -- and a Briton are still missing and their status is unknown.

The bodies of a South Korean teacher and two German nurses, all in the 20s, were discovered Saturday, Yemen's state-run SABA news agency reported.

News of their deaths did not surface until Monday. The nurses worked for a hospital in Saada run by the Dutch charity, World Wide Services Foundation, according to SABA.

Germany's foreign office is trying to confirm the status of its seven missing nationals, but Foreign Minister Frank-Walter Steinmeier said Tuesday that "unfortunately we have to assume that there are two female German nationals among the dead."

The group was apparently on a picnic when they were abducted Friday in Yemen's Saada province, according to South Korea's Yonhap news agency.

The nine foreigners "ventured outside the city of Saada without the required police escorts due to the heightened security situation in the area," said Mohammed Albasha, a spokesman for Yemen's Embassy .

"This event was a heinous crime and constitutes not only a violation against the peaceful principles of Islam, but also the precepts of humanity," the embassy spokesman said. "Moreover, it does not reflect the good traditions and culture of Yemen."

The governor of Saada City has offered a $25,000 reward for the capture of the kidnappers, an embassy spokeswoman said.

It is unclear who is behind the kidnapping. Initial official statements said the group was apparently seized by Houthi rebels, Shiite militants who have been fighting the government for years, according to SABA. The militants are hoping to derail the peace and reconstruction process in Saada, which has been rocked by war in the past year, according to SABA.

However, the news agency later reported Houthi rebels accused drug cartels of abducting the group and killing the three. In addition, SABA said a spokesman for the rebels accused regional tribes of being behind the kidnappings and slayings.

It is the latest in a string of kidnappings of foreign workers in Yemen this year. All of the previous hostages had been released unharmed, including 24 medical workers seized last week by armed tribesmen in Yemen's Amran province.