(CNN) -- Defying threats of arrest or worse, witnesses to protests in Iran are managing to leak reports of violence after the country's disputed presidential elections. 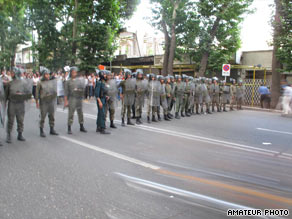 Anti-riot police form a barrier against protesters in Iran Tuesday.

"Censoring is very bad here and they have reduced Internet speed," two Iranians said to a friend outside the country. The pair wanted to broadcast images of damage and casualties after a reported attack on a dorm at the University of Tehran. "We managed to upload a few pictures and movies ... please give it to news agencies and ask them to air it."

The witnesses said riot police and militia attacked the dormitory Sunday night after a student protest the day before. Up to 150 students were arrested, according to the account, and at least one was killed. Students were beaten and shot, and one of the buildings caught fire. Some university professors resigned after the incident, the witnesses said.

CNN cannot independently confirm this or other reports. The images showed a heavily damaged building, the charred remains of what appeared to be a dorm room, an injured or dead person, a burned motorcycle and a bloody floor.

Many Iranians feel the June 12 election was "a sham," a Tehran man in his 20s told CNN in an interview.

"During [the] previous presidential election, we had a 50.9 percent turnout," he said. "This time, we got 82 percent, because people wanted change and [current President Mahmoud] Ahmadinejad out. We know that many of Ahmadinejad voters from [the] last election voted for [opposition leader Mir Hossein] Moussavi this time.

"This is one of the reasons we were certain that Moussavi would win," he said. "On Saturday morning, when they released the results that Ahmadinejad got 64 percent and Moussavi got 33 percent, we were absolutely shocked. If you looked at the returns coming in, Ahmadinejad's returns never dipped -- but [conservative presidential candidate] Mohsen Rezaie's dropped from 630,000 to 570,000. How is that possible? It's just more proof that the elections were rigged ... people feel like their intelligence has been insulted and that they've been lied to."

Watch a report on images coming out of Iran »

Reports of violence came from outside Tehran as well. One video was posted by a person who said he had received it anonymously from a Twitter feed. It showed several people wounded by apparent gunshots, and people attempting to treat them, seemingly without medical supplies. The poster said the video was shot in Esfahan, a city about 200 miles (320 kilometers) south of Tehran.

"We need napkins, towels!" one person yells in the video. "Quick, give them to me!"

"Sit down, sit down," another person tells one of the injured. "Please relax. You are very hurt."

Another image on CNN's iReport site shows the body of a man who has suffered a huge gash to his side. The man was 25, the description said, and was martyred because of his belief in freedom. In yet another video, posted without a description, a screaming crowd surrounds a man's body. CNN is not identifying iReporters who post content from inside Iran.

"Iranian TV isn't giving the big picture," the Tehran man said. "They are depicting the protesters as anarchists. They even report that students are finishing finals at the university when the place has been shut down for days."

One iReporter noted that Moussavi supporters are still able to organize rallies through person-to-person contact. Many Internet sites are blocked, and cell phones lack service in some areas, the person said. iReport.com: Are you in Iran? Share your story with CNN

The Iranian government has blocked journalists who work for international news organizations. Witness accounts are that plainclothes police were on the streets, shooting rifles into crowds and chasing down those with cameras and cell phones attempting to communicate, fostering "mass fear." One person said the injured were staying out of hospitals, as doctors are handing patients over to police.

In Shiraz in southwestern Iran, 28-year-old Najmeh, a hospital nurse, said she had joined protests since Saturday, but decided on Wednesday the risk was too great.

"The police are everywhere you look," she said. "They hurt and arrested so many people last night that no one wants to go out."

Some Moussavi supporters, however, remained firm -- even as they accused those outside Iran of turning a blind eye to their plight.

"We are fighting with our lives and the world is just watching," said Ali, a Tehran University student who asked that his full name not be used. "They see how the government is trying to silence us, how they are beating us -- but they don't come to our help. It's OK. We will succeed, even if we have to fight alone."