By Parag Khanna
Special to CNN

Editor's note: Parag Khanna is director of the Global Governance Initiative at the New America Foundation and author of the best-seller "The Second World: Empires and Influence in the New Global Order" (Random House, 2008), which has been translated into more than a dozen languages. During 2007 he was a senior geopolitical adviser to U.S. Special Operations Forces in Iraq and Afghanistan. A host of InnerView on MTV, he also served in the foreign policy advisory group to the Barack Obama for President campaign. 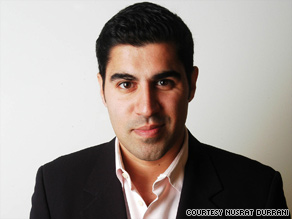 Parag Khanna says Iran's election has raised questions about the legitimacy of the nation's government.

(CNN) -- With a recount announced for the Iranian election, and opposition candidate Mir Hossein Moussavi demanding a fresh election, the political situation in Iran remains on a knife's edge.

We're witnessing the mobilizing power of anti-incumbent forces, particularly youth, who are fed up, and the role of technology in getting voters to the ballot boxes and out on the street.

The Iranian drama has upstaged the recent Lebanese elections in which the U.S.-backed, Sunni-led March 14 coalition won a resounding victory over the increasingly politically active Hezbollah.

Both events, however, point to setbacks for what many have perceived as a Shiite axis of Iran and Hezbollah to undermine American interests throughout the Mideast. For this reason, Arab publics are fixated on the events in Tehran as much as Americans are.

Turkey appears to be the only country that has so far accepted the Iranian election results. The Obama administration, meanwhile, has clearly signaled that it considers the first-round results fraudulent, but has also praised the "vigorous debate" going on within Iran. This has so far proven to be an uncontroversial line.

In situations such as this, where events on the ground drive reality more than anything the United States can do, American policy-makers can only think in terms of possible scenarios and sensible reactions.

If the recount validates incumbent President Mahmoud Ahmadinejad's victory, the most likely scenario, the United States will have to accept it but take comfort in the fact that even after the election is sorted out, the country's credibility will be weakened significantly. The clerics now face a semi-permanent crisis of legitimacy, both due to their over-interference in the election and the equally important issue of their uncertain succession.

Another scenario is that both the protests -- and the crackdowns -- intensify, leading to greater calls for some outside intervention. But any American involvement would be unwise, and would further legitimize Ahmadinejad's anti-American stance.

Recall that when the United States announced in 2007 that it would provide about $40 million for supporting democracy in Iran, the crackdown against dissidents and students only intensified. The same would happen again.

In all cases, the United States has to see how Ahmadinejad approaches the task of reconciling with the sizeable segments of the population that do not support him and are bruised by what they may forever consider a stolen election.

There is yet one more election that plays into the U.S. policy picture for the region, namely in Israel, where Benjamin Netanyahu was elected prime minister and just gave a major speech outlining conditional support for a "demilitarized" Palestinian state.

Could the United States use this as leverage with Arab regimes to deepen reconciliation with Israel and also further isolate Iran's opposition to a two-state solution? Maybe. For many, this would be an ideal outcome, but it depends very much on Netanyahu's sincerity.

Another issue that will return to the forefront after the election is Iran's nuclear program. While many Iranian voters have criticized the opaque way Ahmadinejad has handled the nuclear negotiations over the past several years, claiming it as one example of how he has tarnished Iran's international image, this does not necessarily mean that new leadership in Iran would no longer be interested in nuclear weapons. Here too, the United States will have to wait for signals from Iran.

The United States can be proactive on some levels, however. First, it can attempt to revive Israeli-Palestinian negotiations toward a two-state solution and actively lobby Arab governments to support a push toward settlement while Hezbollah is weakened and Iran is distracted.

Next, it can support a long-overdue regional security conference, likely convened by a Gulf Arab nation like Qatar, which enjoys solid diplomatic relations all around. The conference would include Israel, Saudi Arabia, Iran and other participants to improve transparency over regional military maneuvering.

Such a grouping could also serve to stimulate more cross-border investment in the energy sector and job creation focused on the under-employed "youth bulge." The United States, EU, Russia and China should all quietly support such an event and attend as observers, while quietly urging the deepening of ties among these many historical antagonists.

Between the elections in Lebanon, Israel and Iran, and President Obama's speech in Egypt, it has clearly been an active spring and summer in the Mideast. Let's hope that the outcomes from all of these seminal events create the conditions for a new and more peaceful stage in the region.

The opinions expressed in this commentary are solely those of Parag Khanna.