BERLIN, Germany (CNN) -- Germany has sent a team of pathologists to Yemen's capital to identify the bodies of two women believed to be German hostages recently slain by their captors, the Foreign Ministry in Berlin said Wednesday. 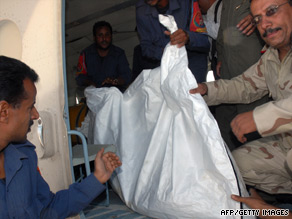 Yemeni military and medical staff remove the body of one of the hostages.

The pathologists arrived in Sana'a on Tuesday, a day after reports surfaced that the bodies of three women had been discovered in the restive northern province of Saada. Yemeni officials have identified the bodies as those of two German nurses and a South Korean teacher, all in their 20s, who had been abducted along with six others Friday.

"Unfortunately we have to assume that there are two female German nationals among the dead," German Foreign Minister Frank-Walter Steinmeier said Tuesday.

The nurses worked for a hospital in Saada run by the Dutch charity World Wide Services Foundation, according to Yemen's state-run SABA news agency.

A German embassy official from Sana'a has also been dispatched to Saada to help with the investigation, the German Foreign Ministry said.

The fate of the remaining hostages, five Germans -- including three children -- and a Briton, is still unclear. Yemen has offered a $275,000 reward for any information leading to the arrest of the kidnappers.

Yemeni special forces and anti-terrorism teams with helicopters are sweeping the Saada area for any sign of the remaining six hostages, according to Yemeni embassy officials.

"Furthermore, Ministry of Interior have mobilized a massive police force, which in cooperation with the army, are working around the clock in the area until the perpetrators of this hideous crime are put to justice," a news release from the embassy said.

The group apparently was on a picnic when they were abducted Friday in Saada province, according to South Korea's Yonhap news agency.

The nine foreigners "ventured outside the city of Saada without the required police escorts due to the heightened security situation in the area," said Mohammed Albasha, a spokesman for Yemen's embassy.

"This event was a heinous crime and constitutes not only a violation against the peaceful principles of Islam, but also the precepts of humanity," Albasha said. "Moreover, it does not reflect the good traditions and culture of Yemen."

It is unclear who is behind the kidnapping.

German officials have reportedly speculated that al Qaeda might be behind the attack. There have been no claims of responsibility.

Initial statements from Yemen's state-run news agency blamed the abductions on Houthi rebels, Shiite militants who have been fighting the government for years. The militants are hoping to derail the peace and reconstruction process in Saada, which has been rocked by war in the past year, according to SABA.

German terrorism analyst Guido Steinberg said it was highly unlikely that Houthi rebels would have attacked a group of foreigners.

"They are insurgents with legitimate demands of the government, but they are not jihadists," Steinberg said.

He said kidnapping or killing Western hostages "would not be in line with the general policies of the movement."

Steinberg said Yemen's government has a clear "political aim" in accusing the rebels of such an attack because of an ongoing "propaganda war" between the government and the Shiite rebels.

This is the latest in a string of kidnappings of foreign workers in Yemen this year. All the previous hostages had been released unharmed, including 24 medical workers seized last week by armed tribesmen in Yemen's Amran province.

CNN's Mohammed Jamjoom in Atlanta, Georgia, and Diana Magnay in Berlin, Germany, contributed to this report.