(CNN) -- Mir Hossein Moussavi, whose apparent defeat in Iran's presidential election has sparked unprecedented demonstrations against the regime, is an unlikely challenger to the country's populist President Mahmoud Ahmadinejad. 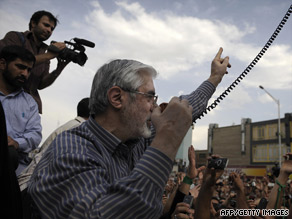 Moussavi (shown on Monday) spoke to a large gathering Thursday, according to Twitter messages.

Moussavi, 67, was prime minister of Iran in the early years of the Islamic Republic, during the country's brutal war with Iraq in the 1980s.

He was credited with successfully navigating the economy during the bloody eight-year war with Iraq, but was also was a political hard-liner whom the British magazine The Economist described as a "firm radical."

"At the end of the day, Moussavi has been more involved and been there from the very beginning of the revolution in a way that Ahmadinejad never was," Trita Parsi, president of the National Iranian American Council, told CNN. "Moussavi was one of the founders of the revolution."

Like most Iran in power, Moussavi rejects the existence of Israel. He defended the taking of hostages at the U.S. Embassy in Iran in 1979, which led to the break in ties between the countries.

He was part of a regime that regularly executed dissidents and backed the fatwa, or religiously-motivated death sentence, against author Salman Rushdie.

Rushdie's novel "The Satanic Verses" came out in 1988. Iran's leaders said the book insulted Islam. The country's supreme leader, Ayatollah Ruhollah Khomeini, called for the death of Rushdie, and Moussavi, in a radio broadcast, said the order would be carried out.

Rushdie lived under police protection for years after the threat.

Moussavi also backs his country's controversial nuclear program, even as he says it will not be used to develop weapons.

He told the Financial Times in April that he would not halt Iran's uranium enrichment program if he were president. "No one in Iran would accept suspension," he said.

Nevertheless, America would find it easier to deal with Moussavi than Ahmadinejad, said Reza Aslan, author of the book "No God But God," an analysis of Islam in politics and culture.

"I think with Moussavi you have someone that I think would be more palatable for a Barack Obama to sit down next to," he told CNN.

Moussavi was named prime minister in 1980. A year earlier, Iran had become an Islamic republic after the ruling secular monarchy was overthrown and Shah Mohammad Reza Pahlavi was forced into exile.

Moussavi was Iran's prime minister until 1989. But the country's constitution was reformed in the late 1980s, removing the job of prime minister, and Moussavi vanished from the public sphere for two decades.

For the past 10 years, Moussavi, a painter, has been head of the state-owned Art Center.

"Twenty years -- what has he done in that time? No one really knows," said Shireen Hunter, a Georgetown University visiting professor and Iranian author of numerous books on the nation's political history.

She said that is working to his advantage.

Of Iran's population of 70 million, almost 60 percent are younger than 28 -- too young to have lived through the 1979 revolution, too young to remember Moussavi's time in power.

"What you have is a war and a history that the younger Iranians do not know about or remember, so they know less about him and see him as the reformer he says that he is," Hunter said.

She spoke with Moussavi for her 1992 book "Iran and the World."

"I quoted Moussavi as saying that Iran did not suffer as much from the Soviet Union as it did from America," Hunter said. "He was very anti-Western. He presided over a lot of nationalism (during his time as prime minister), and now he is saying that he is a reformer? I don't believe in born-again democrats. I'm skeptical."

Largely unknown to the rest of the world -- and semi-forgotten in Iran -- when he announced his bid for president in March, Moussavi campaigned as a foil to Ahmadinejad.

During a fiery television debate on June 3, Moussavi accused Ahmadinejad of being a radical and turning Iran into a "dictatorship." He said Ahmadinejad was an "adventurist" when it came to foreign policy.

Moussavi's wife campaigned for him, an usual step in politics in Iran. Her public support of his candidacy has underscored his professed support for women's rights.

The acrimony between the candidates appeared to help Moussavi.

"This anti-Ahmadinejad image is connecting with a lot of Iranians because many feel Ahmadinejad has gone too far, said too many outlandish things and is responsible for a serious financial crisis the country is in," said Afshin Molavi, a senior fellow at the New America Foundation, a nonprofit, nonpartisan public policy institute in Washington.

Molavi is also the author of "The Soul of Iran," a book about Iran's middle class struggling to free itself, under intense economic and cultural restraints, from the control of the state.

"We have really an interesting moment of historic irony here," Molavi said on CNN. "Moussavi is a child of the revolution. Moussavi was never a real reformer, either, when he was prime minister.

"And now he's being faced with the question: Should he unleash the young people out onto the streets who supported him -- thus threatening the very system that he fought for?"