TEHRAN, Iran (CNN) -- The Arab world is among the worldwide audience that has been closely watching as events in Iran have unfolded over the past week. 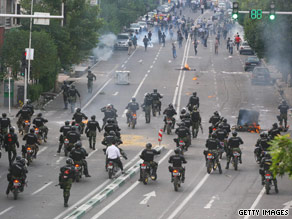 "In all honesty, I am amazed by these Iranians," Egyptian human rights activist and blogger Walid Abbas posted on his Twitter page. "I have no green t-shirt" Abbas tweeted Saturday. He was referring to the color worn by many supporters of opposition candidate Mir Hossein Moussavi, whose supposed failure to win last week's election sparked the wave of unrest that has gripped the nation.

Watching the events unfolding in Iran on Twitter, Youtube and other social networks, the Egyptian activist said he is learning from the Iranian activists. He said he does not support Moussavi because he is part of the Mullah system.

"We are not with Moussavi," Abbas tweeted, "We are with the Iranian people and their demands."

Taghlob Salah, a 24-year-old Iraqi student at Baghdad Law College, told CNN that the Iranian youths who make up most of the protesters can be inspiring to Iraqis, despite cultural differences.

"Despite the difference that we have with Iran and the fact that many Iraqis don't trust their Persian neighbor, we are still Muslims and at the end of the day that matters a lot," he said. "We will look at this phase in Iranian history and learn, for sure and I can say that we will learn from them, 100 percent."

Iraq and Iran are culturally linked because their populations are predominantly Shiite Muslims, as opposed to Sunni Muslims who make up the majority of most Arab countries.

Salah credited the Internet for giving everyone involved a chance to have their voices heard. "There are so many Iraqi groups all over Facebook," he said. "The world is evolving; we are developing our approach to our surroundings."

Abdel Bari Atwan, editor of the London-based pan-Arab newspaper Al-Quds Al-Arabi, expressed dismay over the continued protests. He called on Moussavi to be "responsible enough to protect his people and avoid bloodshed, instability and confrontation in his country that may rupture the Iranian internal unity spreading chaos throughout the region."

Atwan said Ayatollah Ali Khamenei made it clear in his speech during Friday prayers that his patience had run out and he praised the supreme leader for having displayed "leniency" in his dealings with the protesters, but predicted that that leniency would not continue. iReport.com: Share images from Iran

Abd Rahman Rashed, editor of the Saudi-owned, London-based Arabic daily Al-Sharq Al-Awsat, expressed a different point of view. In an editorial published Saturday, Rashed directed comments to Arab supporters of Iranian President Mahmoud Ahmadinejad, whose landslide victory in last week's election is being challenged by Moussavi and his supporters. "No matter what happens, Iran did technically change and will shift its course in a great way," Rashed wrote. "It is over," he said. "Iran the one system, the street and the agenda is over."

They may not understand Farsi or why some Iranians voted for Moussavi, Mehdi Karrubi or Mahmoud Ahmadinejad, but Arabs can surely relate to the passionate shouts of "God is Great!" And "Down with the dictator" in defiance of Iran's theocracy.

Relations between Iran and Arab states have always been tense: through its proxies, Iran sometimes accuses some of the leading Arab states, including Egypt and Saudi Arabia, of being subject to the whims of Western imperialism and of failing to confront America and its ally, Israel, in the region.

Rashed credited Iranians for speaking with courage against their government's funding of controversial organizations like Hezbollah, Hamas and anti-government groups in Yemen and elsewhere.

He said Iranians voted against the current system because they don't want the government to dedicate the country's budget to ally itself to such organizations instead of focusing on the average citizen.

Some Arab states look to Iran as a regional superpower that can support them financially, militarily and politically in their confrontation with the international community. Those states include Syria and Sudan, which support organizations like Hamas and Hezbollah -- deemed terrorist organizations by the United States -- that are used as a proxy to challenge America and Israel in the region.

Some Arab states have long warned that Shiite Iran wants to spread its power across the Sunni-dominated Arab world, causing more mistrust and friction between the Persian nation and the Arab world.

Recently, Egypt and Morocco accused Iran of attempting to spread the Shiite faith among its Sunni population and creating Shiite converts and activists in their communities and in the rest of the Arab world -- a charge that Iran has denied.