WASHINGTON (CNN) -- Demonstrators gathered in major cities in France, the United States and Germany on Saturday to condemn Iran's crackdown on pro-democracy protesters in Tehran. 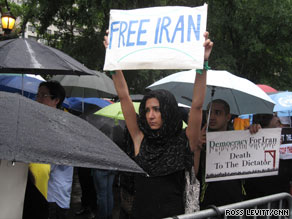 Demonstrators gathered near the United Nations in New York on Saturday.

The rallies ranged from tens of thousands of Iranian exiles and supporters who crammed a Paris, France-area convention center to the hundreds of demonstrators who braved a downpour in Washington to march to the White House.

In Hamburg, Germany, protesters marched against the announced result of last week's Iranian election, which had President Mahmoud Ahmadinejad declared the overwhelming victor in voting that opposition groups called rigged.

"We hope that everything stays peaceful, that the people in Iran get their rights in a peaceful way and that the will of the people will be stronger than all possible repression mechanisms," said an unidentified organizer of the Hamburg protest.

In Paris, a rally that organizers called the largest gathering of exiled Iranians drew people from across Europe and the Middle East, according to a statement by the National Council of Resistance of Iran.

It said Maryam Rajavi, identified as president-elect of the organization, praised the uprising in Iran as the real choice facing the Iranian people, rather than the "illegitimate and rigged election."

Rajavi said Khamenei's defense of the election and refusal to annul it signaled an imminent rift in Iran over allegiance to the supreme leader, the statement said.

"The religious dictatorship and all its repressive organs must be dismantled so as to enable the Iranian people to take part in a free election under the United Nations supervision," the statement said.

The Washington march started in a heavy downpour, but the crowd of a few hundred swelled to about 1,500 as the rain subsided and the group reached the White House. iReport.com: Share images of Iran