LONDON, England (CNN) -- A survey of Iran's election results raises "serious questions" about the victory that President Mahmoud Ahmadinejad is said to have won and uncovers irregularities in the official results, a British think tank said Sunday. 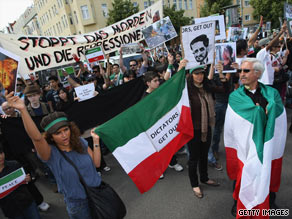 Claims that Ahmadinejad, the conservative incumbent, swept the board in rural provinces also flies in the face of previous results, said Chatham House, which conducted the survey with the University of St. Andrews in Scotland.

Release of the survey results comes on the heels of violent demonstrations that followed Iran's disputed June 12 presidential election.

Anti-government demonstrators have protested the results in street rallies and marches, defying warnings from Iran's supreme leader, Ayatollah Ali Khamenei, not to engage in such action.

Watch amateur video of the past week's violence »

For the survey published Sunday, researchers worked from the province-by-province breakdowns of the 2009 and 2005 results, released by the Iranian Ministry of Interior, and from the 2006 census as published by the official Statistical Center of Iran, Chatham House said.

The survey made four main observations:

"The analysis shows that the scale of the swing to Ahmadinejad would have had to have been extraordinary to achieve the stated result," said professor Ali Ansari, a co-author of the survey who is director of the Institute for Iranian Studies at St. Andrews.

Data from the June 12 election suggests a sudden shift in political support toward Ahmadinejad in rural areas, which had not previously supported him or any other conservative, the survey said.

At the same time, the official data suggests the vote for challenger Mehdi Karrubi -- who was extremely popular in the rural, ethnic minority areas in 2005 -- has collapsed entirely, even in his home province of Lorestan, the survey said.

In that province, his vote went from 55.5 percent in 2005 to 4.6 percent in the most recent vote, the survey found. At the same time, Ahmadinejad won 50.9 percent of the vote in this election, including the votes of nearly half (47.5 percent) of those who voted for reformist candidates in 2005, the survey found.

Such an outcome is "highly implausible," the survey said.

The Iranian government has said Ahmadinejad won the election by a huge margin. Ahmadinejad's main challenger, Mir Hossein Moussavi, and his supporters have contested the results.

"In a country where allegations of 'tombstone voting' -- the practice of using the identity documents of the deceased to cast additional ballots -- are both long-standing and widespread, this result is troubling but perhaps not unexpected," the Chatham House survey said.

"This problem did not start with Ahmadinejad," the report added. "According to official statistics gathered by the International Institute for Democracy and Electoral Assistance in Stockholm, there were 12.9 percent more registered voters at the time of Mohammed Khatami's 2001 victory than there were citizens of voting age."