(CNN) -- "RIP NEDA, The World cries seeing your last breath, you didn't die in vain. We remember you." 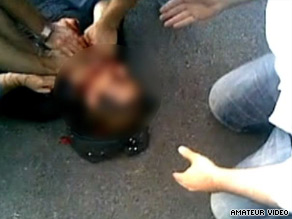 People tend to a woman called Neda as she lies on the street.

Amid the hundreds of images of Saturday's crackdown on protesters in Iran that were distributed to the world over the Internet, it was the graphic video showing the dying moments of a young woman shot in the heart that touched a nerve for many people around the world.

Like most of the information coming out of Tehran, it is impossible to verify her name, Neda, or the circumstances of her apparent death, which was captured close-up on a bystander's camera.

CNN ran a pixilated version of the video, which was posted on YouTube. Another amateur video captured images of Neda and her father attending what appeared to be a peaceful protest, just moments before the shooting.

Watch Neda and her father moments before the shooting »

It shows a woman in jeans and white sneakers collapsed on the street, as the person with the camera -- most likely from a cell phone -- runs toward her and focuses on her face.

One blogger posted that Neda was protesting with her father in Tehran when pro-government Basiji militia opened fire and shot her.

"The final moments of her tender young life leaked into the pavement of Karegeh Street today, captured by cell phone cameras," the unnamed blogger posted on Newsvine.com. "And not long after, took on new life, flickering across computer screens around the world on YouTube, and even CNN."

People on Twitter started forming a discussion group with the "hashtag" #neda to post their comments about her death and media coverage of the killing, as well.

It became one of the top "trending topics" on Twitter by Saturday evening, early Sunday Tehran time.

"Neda, ojala que tu muerte no sea en vano," one poster tweeted in Spanish. "Neda, I hope that your death is not in vain."