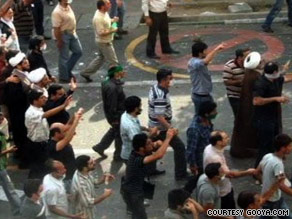 Clerics in robes and turbans join rallies to protest the disputed presidential election results in Iran.

In a blatant act of defiance, a group of Mullahs took to the streets of Tehran, to protest election results that returned incumbent President Mahmoud Ahmadinejad to power.

Whether these clerics voted for Ahmadinejad or one of the opposition candidates is unknown. What is important here, is the decision to march against the will of Iran's supreme leader who called the results final and declared demonstrations illegal.

In the Islamic Republic of Iran, Mullahs rule supreme. They are the country's conservative clerics; the guardians of the Islamic revolution and its ideologies. They're loyal only to God and Iran's supreme leader, Ayatollah Ali Khamenei.

Iranian opposition supporters took to the streets in protest of their candidate Mir Hossein Moussavi's loss in the June 12 presidential elections.

They alleged the elections were rigged. Moussavi asked to annul the results and hold new vote. Ayatollah Khamenei rejected the proposal, backed Ahmadinejad and called on people not to demonstrate or else face the consequences.

When the protests began, Iranian students for the most part, especially women were visible and in the lead.

Their numbers dwindled over time. Some blame police and militia crackdown and intimidation.

Social networks swelled with amateur video showing protesters beaten or shot at. Their screams of pain and even death were caught on tape by fellow protesters using mainly cell phone cameras.

Throughout all that, some clerics of the Islamic Republic have spoken up against the stifling of people's right to voice their opinion and in support of new elections.

On his Web site, Grand Ayatollah Hussein Ali Montazeri described government efforts to crackdown on the protests as threatening the legitimacy of the Islamic Republic because it was no longer representing all the people.

Moussavi ally and former president Mohammad Khatami also said in a statement that to "protest in a civil manner... is the definite right of the people and all must respect that."

The graphic pictures out of Iran in the past week have shown time and again, making statements is one thing and taking to the streets is another.

Iranian opposition at the leadership level and in the streets now has new faces, made up of those who had opposing ideologies before the election.

One symbol of that has become a nightly tradition in Iran. Secular or religious, Iranians go to their rooftops every night.. and shout out "Allahu Akbar" -- God is great -- and "down with the dictator."