(CNN) -- A young Iranian woman named Neda is gunned down in one of the most iconic images of the last week. Another walks down the street, defiantly showing off her hair and body in a revealing dress. And still another woman says she's not scared of paramilitary forces -- no matter how many times she gets beaten. 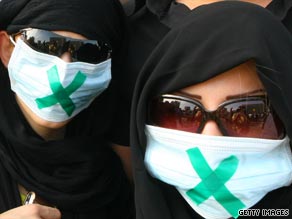 Women have taken to the streets of Tehran. "This shows the new face of Iran," one expert says.

"When they want to hit me, I say hit. I have been hit so many times and this time it doesn't matter. I just want to help my brothers and sisters," says the 19-year-old woman whose identity is being withheld by CNN for her safety.

Amid the clashes and chaos, there has been a recurring scene on the streets of Tehran: Women, in their scarves and traditional clothing, at the heart of the struggle. Some are seen collecting rocks for ammunition against security forces, while video showed one woman trying to protect a fallen pro-government militiaman wounded in the government crackdown. At Shiraz University, riot police clubbed women dressed in black robes. "Don't beat them, you bastards," one man yells.

When security forces come to attack, the 19-year-old woman protester says she looks them in the eye and asks: "Why do you kill your brother? Why do you hit your mother, your sisters?"

"We all tell them, if you're Iranian, you shouldn't do that to your people, to your own country's people," she told CNN by phone.

Watch woman stand up in defiance to power »

But it's the woman known as Neda who has become the symbol of women on the front line that has galvanized opponents of the Iranian regime. In a widely circulated video, Neda is seen in the middle of protests over the weekend. She is shot and drops to the ground. Blood runs from the side of her mouth as a few people, including her music professor traveling with her, press on her chest and shout her name. One pleads, "Do not be afraid." The camera closes in on her face as her eyes roll back and are still.

Karim Sadjadpour, an associate at the Carnegie Endowment for International Peace, said the image of Neda and other women at the protests showed the difference from the 1979 revolution. "The iconic pictures from the revolution 30 years ago were bearded men. This shows the new face of Iran -- the young women who are the vanguards of Iran."

Abbas Milani, the director of Iranian Studies at Stanford University, agreed that Neda was becoming a symbol for all the women who have become involved in the turmoil that has followed the disputed election. "She will become the image of this brutality and the role -- the truly significant role -- that women have played in fighting this regime. I think that women are the unsung heroes of the last few years. They are the ones who began chipping away the absolute authority of the mullahs."

The protests haven't just been confined to Iran's everyday women. The daughter of former President Ali Akbar Hashemi Rafsanjani was arrested over the weekend while taking part in a protest. She was later released.

In addition, Zahra Rahnavard, the wife of Mir Hossein Moussavi, whose apparent defeat in Iran's presidential election has sparked the unprecedented demonstrations, campaigned for her husband, an unusual step in politics in Iran. Her public support of his candidacy underscored his professed support for women's rights.

Learn more about the timeline of events »

And in another act of defiance, apparently from after the election, a woman who appears to be in her 20s or 30s walks down a street in Tehran, showing off her body in a revealing dress and displaying her long, curly hair. In Iran, women are forbidden to show their hair, and they must keep their bodies covered. "Lady, is it a revolution already?" one female driver says as she passes by.

The 19-year-old demonstrator, who spoke by phone with CNN, says women are out in the streets in much larger numbers than men. She provided CNN with images of paramilitary forces on Saturday confronting protests, just before she was beaten. She says she was beaten again during protests Monday.

"The women are all together and they say, 'We're going to stay here.' There are so more [women] than men," she said, referring to the number of women protesters. "Until now, the women didn't have a chance to express themselves, to say that we are important in our country's future. But now, they can play an important role in our freedom. It's a good chance for us."

"I'm absolutely optimistic, because history has taught me that all the revolutions start like this," she said. "Every revolution has violence and some people die, but nothing stays like this forever."

CNN's Ivan Watson and Wayne Drash contributed to this report.