WASHINGTON (CNN) -- The U.S. expects the level of violence in Iraq to rise as it goes ahead with its planned withdrawal of troops from Iraqi cities by June 30, the Pentagon said Wednesday. 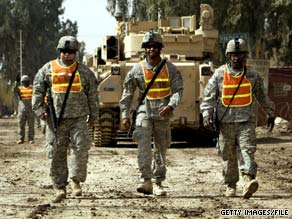 Except for soldiers in advisory roles, all U.S. combat troops will leave Iraqi cities and towns by June 30.

Under the terms of its agreement with the Iraqi government, the U.S. will remove all combat troops from Iraqi cities and towns -- leaving security responsibilities to the Iraqis and remaining only in a training and advisory capacity. In areas outside of the cities and towns, the U.S. military will continue to conduct combat operations and security patrols in coordination with the Iraqis.

Violent attacks are at an "all-time" low according to Pentagon spokesman Geoff Morrell, but there continue to be sporadic high-profile attacks by insurgents, including a blast that killed 62 people and injured 150 others at a Baghdad market on Wednesday.

Such a spike in violence is to be expected, Morrell told reporters Wednesday, "based upon the pattern of behavior that we've seen over the past few weeks, and, frankly, historically in Iraq, leading up to seminal dates, whether it be elections or other significant dates, of an uptick in the operational tempo of terrorists and insurgents."

In a letter to U.S. troops, the top U.S. commander insisted the withdrawal was appropriate.

"This is the right time to transition security of the cities to the ISF [Iraq Security Force] who are ready for this task," Gen. Raymond Odierno wrote on June 21.

While the U.S. has seen progress, it is not ready to declare victory in Iraq and Morrell suggested such a declaration may never happen.

"I don't think anybody's too preoccupied with declaring victory. I don't think that was necessarily something we'll ever do," Morrell said at a news conference at the Pentagon.

The notion of declaring victory is controversial since former President Bush's declaration in May 2003 that major combat operations in Iraq were over while he was standing under a sign reading "Mission Accomplished."

The pronouncement was premature, with violence and deaths of U.S. troops and Iraqi civilians escalating in the years that followed.