(CNN) -- Four Iranian footballers have been "retired" from the national side after protesting against the contested election result in the country during a match against South Korea, according to media reports. 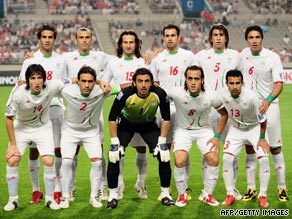 The players drew attention to the situation in Iran by wearing green armbands during last week's World Cup qualifying match in Seoul.

Green was the color used by opposition leader Mir Hossein Moussavi during his campaign for the presidency and has been widely worn by supporters protesting since Mahmoud Ahmadinejad was announced the winner.

Six players wore the armbands during the first half of the match, returning in the second minus the accessories.

However, according to Iranian news reports four players -- Ali Karimi, 31, Mehdi Mahdavikia, 32, Hosein Ka'abi, 24 and Vahid Hashemian, 32 -- have been "retired" from the sport following the gesture.

The pro-government newspaper, Iran, reported the players had received the equivalent of a life ban.

Ahmadinejad is a known football fan, and has taken a keen interest in the national team's affairs.

On June 14 he compared protesters in Tehran to fans of a losing football team.

In 2006 Iran was banned from international competition for a short time by the world governing body FIFA after claims of improper interference by his government.