DUBAI, United Arab Emirates (CNN) -- Inspired by images of Iranians taking to the streets to support the opposition presidential candidate, Michelle May decided to head to Tehran. 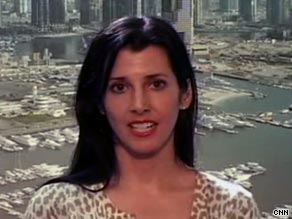 Michelle May, an American and Irish national, was detained and forced to leave Iran.

"I just felt a real need to be there with my friends, and I just wanted to be a part of what could possibly be history," May told CNN's "American Morning" on Wednesday. "So I made arrangements at the last minute."

May, who is an American and Irish national, used her Irish passport to travel to Tehran just days before the street demonstrations turned violent as Iranian authorities cracked down on those protesting the results of the June 12 election.

"I had been there two times before, and I feel very connected to the country and the people there," she said. "I have a lot of friends."

Her third visit took a terrifying turn Saturday shortly after she checked for the latest news at an Internet cafe in Tehran.

"This young man befriended me. I was trying to download CNN to find out -- this was the day after the ayatollah gave his prayer on Friday," May said.

Afterward, the man helped her hail a taxi outside the cafe to meet one of her friends for lunch, she said.

"About half an hour into that ride, the next thing I know, there are two motorbikes on either side of my taxi," she said. "He's on the back of one of them, and three big Basij guys are on the other, and they pull me over. I knew what was happening."

The Basij, Iran's feared volunteer paramilitary group, has cracked down on the thousands of protesters in the bloody aftermath of the Islamic republic's disputed presidential election.

"I was terrified, and I immediately started screaming, saying no, no, no," May said.

The young man climbed into the taxi and told her to go with him and the three other men.

"So I stood up to get out of the taxi, but then I thought I'll make a scene on the street, maybe they'll leave me alone," she said. "However, that didn't work. I think because everyone's just terrified of the Basij right now."

She was forced into a car and held for more than an hour. Her captors accused her of spying, and after much back-and-forth they drove by a police station where about 50 Iranian police were hanging out.

"I actually trust the police there so I banged on the window, and the guy next to me, the one who spoke English, said, 'OK, we'll stop.'

She was told to leave the country, and she headed for Dubai where she spoke to CNN.

May said she admires the bravery of the Iranians protesting in Tehran.

"I don't even know how they're doing it, because honestly everyone I know there is just scared," she said. "They know that they're risking their lives, but they are so fed up that they're willing to do that."

All About Tehran • Iran