(CNN) -- Despite his threats of "consequences" and the subsequent beatings and shooting deaths by government agents, the open protests on Iran's streets by hundreds of thousands of people have dented the shield of invincibility of Iran's Supreme religious Leader, Ayatollah Ali Khamenei, say sources in Iran. 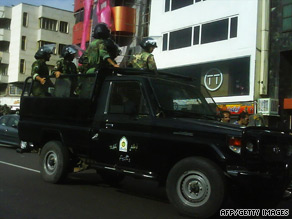 Chants of "Death to Khamenei" broke a state-imposed, and a self-imposed absolute prohibition on criticizing a leader believed to be wielding the wisdom and authority of God himself.

But right now, the massive network of Iran's intelligence agents, Revolutionary Guard, paramilitary Basij, and police of all sorts, are cracking down.

Sources say they are also going house to house, through email accounts and web postings, through cell phone calls and SMS text messages (when the system is allowed to stay up) and even to taxi agencies whose drivers hoisted Mir Hossein Moussavi posters during the election campaign.

They are rounding people up and, as it was chillingly put to me, in Iran's prisons "we have room for all of them." In addition protestors are being paraded "confessing and repenting" on Iranian state TV.

The government also claims to be arresting "foreign agents" accused of stirring up the protests. Sources say the Iranian Revolutionary Guard Corps (IRGC), aligned with Ayatollah Khamenei, plucked Mahmoud Ahmadinejad from total obscurity as presidential candidate in 2005, in order to hold the line against "reform" in the country after eight years of the reformist president Mohammad Khatami.

Sources in the Iranian government and well-placed analysts inside the country Say the IRGC has taken up influential positions in many major sectors of Iranian society, such as the oil industry, finance, transport, construction and other businesses and politics.

Iran has been "increasingly radicalized over the last four years," one told me. While there are divisions within the clerical establishment and in parliament, sources tell me that for now that does not threaten the ruling establishment.

I was told the weekend arrests of former president Hashemi Rafsanjani's daughter and other relatives, and their swift release, were a warning to Rafsanjani, who backed Moussavi in the election. So far the powerful mullahs, monitoring it all from the holy city of Qom, are mostly quiet.

And finally, for now, while Moussavi has startled the system with his willingness to press the election case, he is also considered, at this moment, no Ayatollah Khomeini. Nowhere near as charismatic and powerful as the leader of the successful revolution in 1979.

Sources say Moussavi is not formally arrested or under house arrest. However his movements and words are "controlled" by security and intelligence officials. So in effect there is no visible leader for the street protesters today -- unlike 1979, when Khomeini led from exile.

Sources say all this could change if mass demonstrations hit the streets and simply remain there all over the country, if the security forces refuse to expand the crackdown, or if people go on nationwide strike, like they did in 1978-79.

As long as the streets and squares remain blanketed by security, they are mostly clear of protesters.

Right now, chants of Allahu-Akbar still resound from the rooftops at night. Although residents say they seem to be dying down in some neighborhoods. Even the honking horns and flashing headlights are fading from the traffic.

At this moment, however, it is impossible to know how this contest of wills -- and powers -- will play out.