TEHRAN, Iran (CNN) -- Iran's president slammed President Obama on Saturday, saying officials in the Islamic republic are astonished over what they see as his interference in Iran's disputed elections. 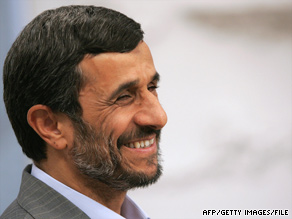 "Didn't he say that he was after change?" Ahmadinejad asked Iranian judiciary officials in a speech. "Why did he interfere? Why did he utter remarks irrespective of norms and decorum?"

His remarks are countering Western criticism of the June 12 elections, which the government said Ahmadinejad won in a landslide.

Ahmadinejad spoke a day after Obama discussed the unrest in Iran during a news conference with German Chancellor Angela Merkel.

Watch an author's take on Iran »

As the Iranian president spoke, Iran's Foreign Ministry slammed the Group of Eight on Saturday for its criticism Friday of the post-election violence.

Ahmadinejad's remarks raised the issue of the new dynamics between longtime adversaries Iran and the United States.

The Obama administration has made efforts to seek dialogue with the country's regime but has been moved to toughen rhetoric in light of the unrest in Iran.

"They keep saying that they want to hold talks with Iran," Ahmadinejad said. "All right, we have expressed our readiness as well. But is this the correct way?

"Definitely, they have made a mistake. They have revealed their intentions before the Iranian nation, before the world nations. Their mask has been removed. "

Speaking to reporters on Friday, Obama said the violence used against demonstrators disputing the election results "is outrageous. And despite the government's efforts to keep the world from bearing witness to that violence, we see it and we condemn it."

He also said it was "absolutely clear" that Ahmadinejad's chief rival in the election, Mir Hossein Moussavi, has "captured the imagination or the spirit of forces within Iran" and has become a representative of street protesters, who have clashed with security forces.

Obama said he and Merkel "share the belief that what's happened in Iran is unacceptable when it comes to violence against its own citizens."

"I continue to believe that ultimately, it's up to the Iranian people to make decisions about who their leaders are going to be," he said Friday.

"But as I said this week and I've said previously, a government that treats its own citizens with that kind of ruthlessness and violence and that cannot deal with peaceful protesters who are trying to have their voices heard in an equally peaceful way I think has moved outside of universal norms, international norms that are important to uphold."

Obama on Friday was asked if he had thoughts about Ahmadinejad's call that he apologize over claims of meddling in the elections or if Ahmadinejad "should apologize for calling you someone like President Bush."

"I don't take Mr. Ahmadinejad's statements seriously about apologies, particularly given the fact that the United States has gone out of its way not to interfere with the election process in Iran," he said.

He also said Ahmadinejad should "think carefully about the obligations he owes to his own people. And he might want to consider looking at the families of those who've been beaten or shot or detained."

Iran also criticized the Group of Eight foreign ministers for their remarks in Trieste, Italy, in a joint statement.

"We fully respect Iran's sovereignty," the joint statement reads, but "at the same time, we deplore the violence that has erupted in the wake of the election and that has led to the death of Iranian civilians."

The ministers called on the government "to guarantee respect for the grass-roots will expressed in the ballot box," and voiced hope that "a solution can be found through democratic dialogue."

Iranian media quoted Foreign Ministry spokesman Hassan Qashqavi as expressing regret over the "interventionist and hasty stances" of the ministers.

Iranian officials underscored their position that the turnout was strong and the vote was conducted in a "competitive and free atmosphere."

Some in Iran have criticized what they say was a denial of visas by the United States to an Iranian delegation intent on attending a U.N. conference about the world economic crisis.

State Department spokesman Ian Kelly said Saturday that on June 16, Iran requested the return of a delegation's passports without visas.

Kelly said that Iran submitted applications for a large delegation on Tuesday, too late for the conference's start on Wednesday.

However, the department expedited the processing and issuance of seven visas for a smaller delegation led by Foreign Minister Manouchehr Mottaki, Kelly said.