(CNN) -- Rescuers on Tuesday spotted the wreckage of a Yemeni jet that crashed in the Indian Ocean off the island nation of Comoros, the country's Vice President Idi Nadhoim said. 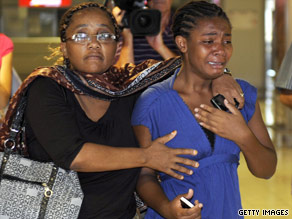 Relatives of passengers of the plane that crashed arrive at Marseille airport in southern France.

The plane, carrying more than 150 people, was en route to Moroni, the capital of Comoros, from Yemen's capital, Sanaa.

A reconnaissance plane spotted traces of the jet in waters off the town of Mitsamiouli, Nadhoim said.

"There were no sign of survivors," he said. "There are a few bodies floating and there is a lot of debris floating around."

The crash occurred as the plane approached the Hahaya airport in Moroni. The plane tried to land, but couldn't, and then U-turned before it crashed, Nadhoim said. Officials did not know why the plane could not land, he said.

There were 142 passengers and 11 crew members aboard, Yemenia Air officials said.

Nadhoim offered another figure, saying there were 147 passengers.

Most of the passengers aboard the Airbus A310 were Comoran, an official at Sanaa's international airport told CNN.

An official at Charles De Gaulle airport in Paris said there were 66 French passengers aboard.

There was no indication of foul play behind the crash, the official in Yemen said.

The crash was the second involving an Airbus jet in a month. On June 1, an Air France Airbus A330 crashed off Brazil while en route from Rio de Janeiro to Paris, France. All 228 aboard are presumed dead. The cause remains under investigation.