JERUSALEM (CNN) -- The Israeli navy took control of a boat that violated an Israeli blockade and crossed into Gazan waters Tuesday, the Israel Defense Forces said, while a Gaza group said the ship was carrying humanitarian aid, a former U.S. congresswoman and a Nobel laureate. 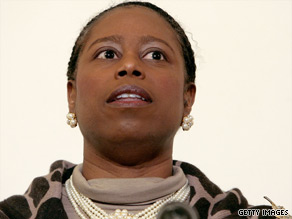 Cynthia McKinney reportedly is asking the international community to demand the crew's release.

The boat's crew included former U.S. Rep. Cynthia McKinney, according to the Free Gaza Movement, a human rights group that sent the boat it calls "Spirit of Humanity" from Cyprus.

Along with McKinney, who served six terms in the House of Representatives from Georgia and was the Green Party's presidential nominee in 2008, Israeli authorities took 20 people into custody, the group said.

Also aboard, the group said, was Mairead Maguire, who co-founded a group that worked for peace in Northern Ireland. Maguire and co-founder Betty Williams received the Nobel Peace Prize in 1977 for their work.

IDF said the Israeli navy contacted the boat, which it called the Arion, while it was still at sea and warned the crew they would not be allowed to enter Gazan waters "because of security risks in the area and the existing naval blockade."

The boat's crew, the military said, would "be handed over to the proper authorities."

Without naming individuals on the boat, IDF confirmed the incident it described was the same one detailed by the Free Gaza Movement.

According to the Free Gaza group, McKinney said, "This is an outrageous violation of international law against us. Our boat was not in Israeli waters, and we were on a human rights mission to the Gaza Strip," before authorities confiscated cell phones.

"President Obama just told Israel to let in humanitarian and reconstruction supplies, and that's exactly what we tried to do. We're asking the international community to demand our release so we can resume our journey," McKinney said, according to the group.

McKinney's father, former Georgia state legislator Billy McKinney of Atlanta, said he received a call from his daughter about 3 a.m. Tuesday. She told him "I'm OK. I'm OK," then hung up as Israeli military began to board the ship, Billy McKinney said. He added that the U.S. State Department gave his family a contact with the U.S. Embassy in Israel but by Tuesday night the family had not heard anything back from the embassy.

IDF said the aid aboard the boat would be delivered to Gaza "subject to authorization."

"Any organization or country that wishes to transfer humanitarian aid to the Gaza Strip can legally do so via the established crossings between Israel and the Gaza Strip with prior coordination," IDF said.

Free Gaza said the Spirit of Humanity voyage is the eighth such trip the group has launched. Five succeeded, the group said, but the Israeli military stopped attempts in January and December 2008.

All About Israel • Gaza • Cynthia McKinney