Opposition movement in Iran not over, experts say

(CNN) -- The chants, the clashes, the outrage, the blood -- for more than two weeks, the world watched as the fallout from Iran's presidential elections unraveled from peaceful demonstrations to government-led crackdowns on city streets. 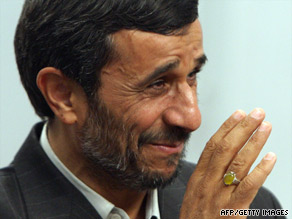 Iran's Islamic leadership says President Mahmoud Ahmadinejad was re-elected and that the case is closed.

Saying it has tallied the votes and investigated the complaints, Iran's Islamic leadership considers the election that gave incumbent President Mahmoud Ahmadinejad an overwhelming win "case closed." And the massive protests that concentrated in Tehran are growing thinner in number.

Yet for the hundreds of thousands who spilled into the streets -- demanding that their votes be counted, their voices be heard -- the movement is far from over, experts say.

"This movement isn't going away anytime soon, but it may not manifest itself as we've seen as of late," said Trita Parsi, president of the Washington-based National Iranian American Council.

But how it will play out is up for debate, with some experts recalling the Islamic revolution that overtook Iran 30 years ago, while others liken the opposition players to the civil rights champions who rocked the United States.

"This is a movement that has swept across all dividing lines in Iranian society -- both rich and poor, the merchants and the intellectuals, the young and old," said Reza Aslan, author of the book "No God But God," an analysis of Islam in politics and culture.

"They're not united because they want certain civil rights; they are united in what they don't want," he added. "They don't want the present course that is leading to the militarization of the state -- other than that, they have nothing else in common."

Still, other Iran experts who have watched the chaos unfold compare the opposition movement not to the Islamic Revolution that ushered in Iran's theocratic establishment, but to the civil rights movement that sought to outlaw racial discrimination against black Americans in the United States in the 1950s and '60s: A long-term push, bolstered by conviction, challenged by setbacks, moments of progress and, at times, bloodshed.

The demonstrators "acknowledged they're not going to overthrow the government and they didn't intend to do that," said Pantea Beigi, a native of Iran and human rights expert with Colorado-based PeaceJam, focusing on youth movements. "It is a closing of a chapter of events that took place, but it's also the start of every citizen being an activist. ... And as in any civil rights movement in any part of the world, it always starts like this."

The movement will likely change strategies, possibly shifting from demonstrations to general strikes and other organized efforts, said Abbas Milani, the director of Iranian Studies at Stanford University.

"They are continuing the struggle," Milani said. "It's not over yet -- only one aspect is over."

Iranians understand the restrictive regime they live under. What's at stake, experts say, is the big picture: The Islamic republic could grow into a militaristic state with more power handed to its Revolutionary Guard (think North Korea), or it could maintain its repressive state and still open lines to the West (think China).

The Revolutionary Guard -- which directly answers to the supreme leader, Ayatollah Khamenei -- effectively cracked down on demonstrators with its troops and members of the Basij, the guard's paramilitary arm that dispersed the crowds and attacked scores of protesters.

Amnesty International says as many as 1,000 people, including demonstrators, dissidents and journalists, have been jailed.

"We know that there will not be some sort of huge power change or revolution, but what I believe is that Iran is at a crossroads," Beigi said. "One road is complete militarization and control of the people and being completely cut off from the rest of the world like North Korea, and another road is being the dictatorship it is but opening up to the rest of the world and moving forward with the rest of the world in technology, in athletics and many other respects, which would in turn naturally provide a little bit more freedom for the youth each step of the way."

Which brings us to the unlikely leader of the youth-dominated opposition, Mir Hossein Moussavi. Observers say it's not that his supporters thought he would bring major changes to the Islamic regime -- but, as a reformist, he may have shifted the government out of Ahmadinejad's hardline policies.

Iran's election authority -- the Guardian Council -- initially declared Ahmadinejad the winner of the June 12 elections, sparking huge protests and, at times, clashes between demonstrators and government troops and the Basij. At least 17 protesters were killed in the chaos, according to official statistics, though the actual number may be higher.

While the protests at first signaled outrage at the election results -- with the vast majority of protesters supporting Moussavi, Ahmadinejad's chief rival -- the collective movement is no longer about the elections, observers say.

Moussavi himself -- Iran's prime minister under Ayatollah Ruhollah Khomeini, who spearheaded of the Islamic revolution and the overthrow of the shah of Iran -- became an unlikely leader of the electoral backlash.

"This has been quite a surprise ... he's a reformist but not a revolutionary," said Ali Alfoneh, a research fellow at the Washington-based American Enterprise Institute who has researched the relationship between Iranian civilians and the Islamic Revolutionary Guard.

Moussavi, along with candidate Mehdi Karrubi, questioned the legitimacy of the June 12 vote count and demanded that the Guardian Council annul the results. The council never entertained the idea.

And even though Moussavi continues to defy the government, some say he's not a practical choice for any long-term movement. The government has warned him to stand down, and human rights organizations have reported that his campaign advisers have been detained as political dissidents.

Thus, he, too, is at a crossroads: Will he make nice with the government and accept the election results? Or will he choose to support the movement, risking imprisonment or expulsion?

"Mr. Moussavi may face no choice other than seeking refuge," Alfoneh said.

Even so, Moussavi's supporters and key figures, including senior politicians and clerics, fueled rifts within Iran's Islamic leadership that were "evident for the whole world to see," Dabashi said.

Khamenei, the supreme leader, publicly supported Ahmadinejad in the election while former President Mohammad Khatami --who served under Khamenei -- withdrew his own bid for the 2009 presidential race to support Moussavi.

Other senior clerics -- responsible for preserving the principles of the Islamic revolution and expressing loyalty to the supreme leader -- spoke out against the government's crackdown on the protests. For example, Grand Ayatollah Hussein Ali Montazeri issued a statement on his Web site, saying that confronting protesters threatened the legitimacy of the Islamic republic because it was no longer representing the people.

The movement is about people asking for greater freedoms, Aslan said. "It's about the people who created the Islamic republic to begin with, saying, 'Wait a second, that's not what we wanted.' "

What's clear is that those fed up with a heavy-handed Islamic regime did make history with their movement.

Many experts suspect they will continue to do so.