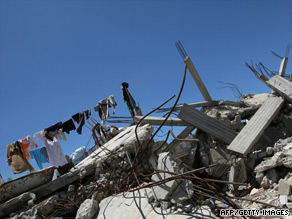 The residents of Gaza are still trying to rebuild their lives after Israel's offensive.

The human rights group also pointed a finger at Hamas and other Palestinian militant organizations in its 117-page report.

Hamas and other Palestinian groups committed war crimes by firing hundreds of rockets into southern Israel, killing three Israeli civilians, injuring scores and driving thousands from their homes, according to the report.

Both sides must allow independent investigations into the 22-day conflict, which spanned December and January, Amnesty said.

Among the report's criticism of Israeli actions:

"Hundreds of civilians were killed in attacks carried out using high-precision, air-delivered bombs and missiles and tank shells. Others, including women and children, were shot at short range when posing no threat to Israeli soldiers."

"The slant of their report indicates that the organization succumbed to the manipulations of the Hamas terror organization," said a Israel Defense Forces news statement. "The Amnesty report ignores a critical aspect of Operation Cast Lead -- Hamas consistently, deliberately and routinely violated international law, specifically the prohibition against the use of 'human shields.'"

About 300 children and hundreds of other unarmed civilians who were not part of the conflict were among the 1,400 Palestinians killed by Israeli forces, the report said.

Amnesty also said Israeli soldiers used civilians as human shields and said it found no evidence that Hamas had done so.

The human rights group's report follows another released in May by a U.N. committee, which said the Israeli government was responsible for civilian deaths and more than $10 million in damage to U.N. buildings during the offensive.

A U.N. team has begun to investigate the offensive, but Israeli authorities have not cooperated, the Amnesty report said.

"Israel's failure to properly investigate its forces' conduct in Gaza, including war crimes, and its continuing refusal to cooperate with the U.N. international independent fact-finding mission headed by Richard Goldstone, is evidence of its intention to avoid public scrutiny and accountability," said Donatella Rovera, an Amnesty International researcher.