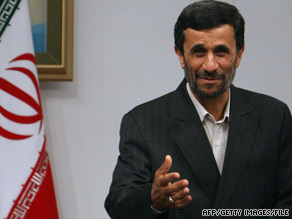 Speaking at a meeting of medical school deans, Ahmadinejad said Iran "will soon pursue a new round of diplomatic activity" amid a new position of strength for the Iranian government, the Iranian Student News Agency quotes him as saying.

"I will go to the United Nations and will invite Obama to negotiations," Ahmadinejad said, adding that such talks would be "in front of the international media, not a sit-down behind closed doors in order to talk about matters."

The Obama administration has sought dialogue with Iran but also criticized the government for its handling of unrest after disputed presidential elections.

Last week, Obama said Iran's government must justify itself not in the eyes of the United States, but in the opinion of its own people.

"A sizable percentage of the Iranian people themselves ... consider this election illegitimate," he said at a White House news conference. "It is not too late for the Iranian government to recognize that there is a peaceful path that will lead to stability and prosperity."

Initially, Obama was criticized by Republicans such as Sen. John McCain of Arizona and Sen. Lindsey Graham of South Carolina for taking a "timid and passive" tone in speaking out against the growing wave of arrests, violence and deaths of pro-democracy activists.

Ahmadinejad said he wants others to stop "meddling" in the internal affairs of Iran.

Iranian officials, including Ahmadinejad, claimed nations such as the United States and Britain have meddled in Iranian affairs. Last week, Ahmadinejad said officials were "astonished" over what they called meddling and warned of repercussions if meddling continues.

"Didn't he [Obama] say that he was after change?" Ahmadinejad asked Iranian judiciary officials in a speech last week. "Why did he interfere? Why did he utter remarks irrespective of norms and decorum?"

"They keep saying that they want to hold talks with Iran," Ahmadinejad said. "All right, we have expressed our readiness as well. But is this the correct way [for holding talks]?"

Meanwhile, two major political figures have been meeting family members of those detained amid post-election unrest.

One was former President Ali Akbar Hashemi Rafsanjani -- chief of the Expediency Council and supporter of opposition leader Mir Hussein Moussavi, according to the semi-official Iranian Labor News Agency.

The other was Mehdi Karrubi, one of the opposition candidates, who reportedly paid visits to families of political detainees, according to the Etemad-e-Melli, Karrubi's newspaper.

Meanwhile, the semi-official Fars News Agency reported that 20 people between the ages of 35 to 48 were executed in Iran on Saturday for "buying, selling and holding heroin, cocaine and opium."