LONDON, England (CNN) -- "There will be consequences" if Iran mistreats a British Embassy employee who was arrested in Tehran, British Foreign Secretary David Miliband said Sunday, as cracks began to appear in the Iranian leadership. 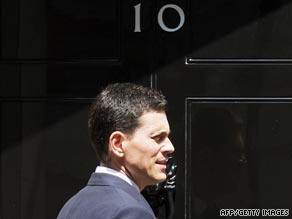 "The whole of the European Union and actually the international community more broadly has been absolutely united in saying that there's no place for this sort of intimidation or harassment and that there will be consequences if it continues," Miliband said on a BBC Sunday morning talk show.

Miliband said he is angry about the treatment of the embassy staff members but wants to keep diplomatic channels open.

"It's very important that my anger, my cold anger about the way our staff have been treated -- Iranians, in this case -- doesn't turn into a rhetorical volley to the Iranian regime, because that doesn't do anything for our people or for reform in Iran," he said.

The embassy employee in custody, who has been threatened with trial in Iran, has done nothing wrong, the minister said.

"He is an honorable, patriotic Iranian who has been working in an open, transparent way for the United Kingdom," Miliband said.

Another employee was to be released Sunday, Miliband said the Iranian Foreign Ministry had told the British Embassy.

Most of the embassy workers have been freed. The one expected to be released Sunday would be the eighth let go and would not face charges, Miliband said.

"Police had arrested him because of his unprofessional conduct in connection with the recent disturbances," Qashqavi said, adding that "Iason had previously been declared persona non grata because of similar activities. The first time he had used a British passport."

Athanasiadis' arrest was reported June 23, with no reason given.

The Washington Times did not immediately respond to CNN's requests for comment. The Foreign Office in London said Sunday that it had no information about the case.

The disputed election has led to unusually public splits among Iran's religious leadership.

Top clerics and seminary students in Iran's holy city of Qom came out Saturday against the results of the election.

The Qom clergy, seen as the backbone of the nation's religious establishment, said in a statement that the election was skewed.

The statement is a significant strike against Iran's supreme leader, Ayatollah Ali Khamenei, who sides with Ahmadinejad, the incumbent.

The clerics' statement was issued by the Association of Teachers and Researchers of the Qom seminary school. It was released the same day that a former Iranian president, who backed the top opposition leader in the election, delivered strong and carefully worded support of the grass-roots protest movement.

Former President Ali Akbar Hashemi Rafsanjani -- who heads the group responsible for appointing or removing the supreme leader and is a supporter of opposition leader Mir Hossein Moussavi -- said he doubted that "any wakened consciousness would be satisfied with the resulting situation," according to the semiofficial Iranian Labor News Agency.

The controversial election prompted two weeks of widespread street protests and civil unrest that led to the death of at least 20 demonstrators and the arrest of more than 1,000, according to Iranian state-run media. The numbers of casualties and arrests could not be independently verified because the government has severely restricted international media coverage.

The clerics of Qom said Iranians had reason to protest.

"It is astonishing that an election, which in plain sight of all, extensively used public funds in order to promote one of the candidates and employed government power to bring in votes. The [state-run] national media was continuously working with different excuses to benefit and openly promote the advantages of one candidate only," the statement said.

The statement went on to challenge the handling of ballots during the election, saying that the observers who were legally required to be present before the ballots' sealing were allowed into most voting stations only after the boxes had already been sealed.

"Therefore we were faced with situations of having more votes than voters," the statement said. "It is very unfortunate that with the great haste in the announcement, there was considerable political capital invested from the supreme leadership."

The clerics' statement also referred to "respected candidates whose rights were violated," singling out individuals such as Moussavi, whom many analysts had expected to win the election.

Rafsanjani, a key politician in the Islamic republic, has become increasingly vocal about the election results.

"People from across the country participated in the elections with excitement," ILNA quoted him as saying Saturday. "But unfortunately the events that occurred after that and the difficulties created for some left a bitter taste, and I don't think that any wakened consciousness would be satisfied with the resulting situation."

"I hope that with proper management and fortitude, in the next few days, we can be witnesses to the betterment of the situation, resolution of the difficulties and the decrease in the number of the families waiting for their loved ones," Rafsanjani said. "We must think about safeguarding the long-term interests and benefits of the system."