BAGHDAD, Iraq (CNN) -- The Iraqi government says it has banned all organized visits to Saddam Hussein's grave amid concern over support for the late dictator's former party. 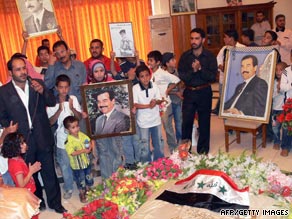 An Iraqi poet, left, gives a recital while children carry pictures of Saddam Hussein over his grave.

A Cabinet statement on Monday said it had directed authorities in Salaheddin province and the Education Ministry to "take all necessary measures" to prevent such outings.

The former dictator, along with his two sons and other relatives, is buried in his hometown of al-Ouja near Tikrit in Salaheddin north of Baghdad. And, Hussein supporters and schoolchildren have made visits there on the late dictator's birthday and hanging date.

There have been videos on sites such as YouTube of people at the site.

One video shows schoolchildren at the grave in December; they carried banners at Hussein's grave that said "We won't forget you father" and they read pro-Hussein poetry.

The government move was made after a recent visit by schoolchildren to the grave, but no reason was given for the decision.

However, the move reflects the concern of Iraq's government over the presence of the Baath Party in Iraq, Saddam Hussein's political movement.

The party and its symbols have been banned in Iraq.

Salaheddin Gov. Mutasher Hussein Alaiwi, said he had not received any official directives yet, but said he would implement Cabinet orders when he receives them.

The governor said that would apply to organized group visits, but they would not stop individual ones.

A resident of al-Ouja told CNN the government had no right to stop visitors from going to their former president's tomb.

"Even if they put police and army outside the door, they will not stop us from visiting our president, our leader and our father," said Mohammed al- Nasiri.

Hussein was executed in 2006 after an Iraqi court sentenced him to death for crimes against humanity.