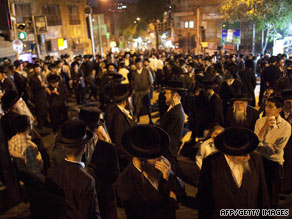 Ultra-Orthodox Jews protest an arrest and the opening of a parking lot on the Sabbath in Jerusalem on Thursday.

The decision by Jerusalem's Magistrate's Court will allow an ultra-Orthodox woman suspected of starving her 3-year-old son to be released from police custody and serve a temporary house arrest instead.

The woman, whom police have not named, is from a radical sect of ultra-Orthodox Judaism known as Toldot Aharon, whose members believe that the modern state of Israel and its laws are a man-made creation beneath the religious teachings of the Talmud, the authoritative body of Jewish religious traditions.

The case and the riots highlight the existence in Israel of extreme ultra-Orthodox religious groups that are awaiting the return of a messiah and that reject modern secular culture.

The woman was arrested by police after staffers at a hospital passed on suspicions that her son was the victim of child abuse.

Police officials said they had collected evidence indicating the woman purposely starved the child. Police also said they had reason to believe the woman, who is five months pregnant, physically abused two of her other children.

Israeli newspaper Yedioth Aronoth published a photo of the child in which he appeared emaciated and reported the child's weight to be 15 pounds (about 7 kilograms). It said that her supporters had posted bail totaling more than $100,000 for her release.

The woman has not made any statements to police, but her husband told Israeli Channel 2 that suspicions that she suffered from Munchausen's syndrome by proxy were not true.

"She was with me all the time. I know she didn't do anything," he said.

Munchausen's syndrome by proxy is a condition in which a person deliberately causes injury to another in order to gain attention.

Her arrest sparked three days of protests in Jerusalem's ultra-Orthodox neighborhoods, culminating in riots late Thursday in which two dozen people were injured and nine hospitalized, according to police spokesman Mickey Rosenfeld.

Dozens were arrested in the protests, in which hundreds of traditionally clad ultra-Orthodox, also known as Haredi, threw rocks at police and set garbage bins on fire. Police used water cannons and horse-mounted officers to disperse the crowds. The disturbances resulted in road closures around the city, and municipal officials estimate more than $100,000 in damage to city property.

The Haredi riots, which were the worst the city has seen in years, led the city to cut off delivery of social services to some ultra-Orthodox neighborhoods because the safety of municipal workers could not be guaranteed.

The protests highlight what has been an increasing tension between the Jerusalem municipality and the city's one-third Haredi population. Disagreement over a recent city plan to open a parking garage on the Sabbath has led to ongoing and sometimes violent protests by ultra-Orthodox Jews.

Tamar El-Or, a sociologist at Hebrew University specializing in ultra-Orthodox groups, says the Haredi community is facing increasing problems of poverty and joblessness, which the community's leaders are making worse by "constant pushing of families to enlarge ... where they have less economic support."

El-Or said cooperation between the ultra-Orthodox community and the city, which had improved in recent years, was a source of anger among the more radical Haredi groups like Toldot Aharon, which does not believe in the state of Israel.

Zionism is the movement calling for Jews of all persuasions to return to their homeland.

All About Child Abuse • Jerusalem • Israel