(CNN) -- An opposition candidate in Iran's disputed presidential election blasted what he called the "thoughtless and clear lies" of the country's security forces Sunday, while students mounted new demonstrations at a university in Shiraz. 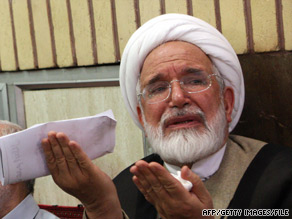 Mehdi Karrubi reportedly said the government's claims that it hadn't attacked his supporters are "astonishing."

Former parliament speaker Mehdi Karrubi, who ran last in the June 12 election, compared government claims that it had not attacked his supporters to the statements that came out of the Iranian monarchy in the days before the 1979 revolution that established the Islamic republic, according to Iran's Aftab news agency.

There were reports Friday that Karrubi himself was roughed up by members of the Basij, the paramilitary force loyal to Iran's hardline leadership. CNN could not independently verify those reports at the time, but Karrubi said he was "assaulted" and that his turban was knocked off, according to Aftab.

He called the official denials "truly astonishing" in light of the widespread distribution of digital pictures and video from the demonstrations that have followed the elections.

"It reminds me of the time just prior to the victory of the Islamic revolution," Karrubi said, according to Aftab.

"Now it seems that all those events are repeating themselves. They have lied to the people, to the point that any false rumors will be taken as truths."

Those demonstrations have persisted for more than a month despite the certification of the official results from the presidential race, which concluded that hardline incumbent President Mahmoud Ahmadinejad won re-election by a 2-to-1 margin over his closest rival, former Prime Minister Mir Hossein Moussavi. Supporters of Karrubi and Moussavi have declared the results fraudulent.

Several videos posted on social media sites showed what was billed as a protest by students at Ehsan University in Shiraz on Sunday. Scores of students are visible in the clips, which featured students demanding the release of political prisoners and singing songs from the 1979 revolution.

The demonstration follows Friday's call by former Iranian President Ali Akbar Hashemi Rafsanjani, a top supporter of Moussavi, for people arrested after last month's balloting to be freed. Rafsanjani still holds a high-ranking post in the clerical leadership but has become increasingly vocal in opposing the brutal crackdown on demonstrators, which continued after his Friday appearance at official weekly prayers.

Another senior cleric hit back at Rafsanjani on Sunday. Grand Ayatollah Jaafar Shojuni said Rafsanjani's "unsubstantiated allegations" about the election could not only raise doubts "to the detriment of the system, but will also render its institutions meaningless."

"If this happens and we start to disband the authoritative posts of the system, then there will be no rock left unturned," Shojuni told the official Islamic Republic News Agency.

"We cannot reconsider those who were unsuccessful in the elections," he said.