BEIRUT, Lebanon (CNN) -- A crowd in southern Lebanon threw rocks at U.N. peacekeepers over the weekend, wounding 14 of them in an effort to prevent the investigation of an explosion in the area, the United Nations said. 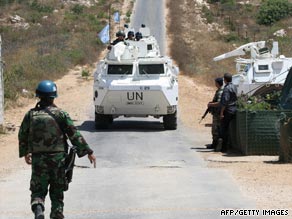 U.N. peacekeepers were investigating reports of an explosion in a Hezbollah stronghold.

The troops with the United Nations Interim Force in Lebanon (UNIFIL) were lightly wounded, and some vehicles were damaged including a UNIFIL ambulance, officials said.

The explosion took place Tuesday in Khirbet Salim, in what Lebanese authorities said was an uninhabited house. Ammunition stored there caused the blast due to the high temperature and humidity, Lebanese officials said.

The region is a stronghold for Hezbollah, the Lebanese militant group and political party that fought a war with Israel in 2006. Hezbollah has carried out attacks against civilians, and the United States and Israel list the group as a terrorist organization.

UNIFIL called last week's explosion "a serious violation of Security Council resolution 1701," which was aimed at ending the 2006 conflict, "notably the provision that there should be no presence of unauthorized assets or weapons in the area of operation between the Litani River and the Blue Line."

Israel said the blast indicated that Hezbollah continued to store weapons near the Israeli border.

Israeli Ambassador Gabriela Shalev argued that the Lebanese Army had assisted Hezbollah in preventing U.N. personnel from investigating the scene.

UNIFIL, in a statement Monday, said it was conducting a joint investigation with the Lebanese military. When troops Saturday night arrived "at a location 1 km from the site in order to verify elements related to the explosion, approximately 100 persons gathered and attempted to hamper the activity.

"As UNIFIL troops were leaving the area, one patrol, surrounded by a group of persons, fired warning shots in the air to clear its exit path."

During the incident, the 14 peacekeepers were injured and the vehicles were damaged, the UNIFIL statement said.

CNN's Cal Perry and Kevin Flower contributed to this report.