BAGHDAD, Iraq (CNN) -- Actress Angelina Jolie walked through a makeshift settlement on the outskirts of Baghdad on Thursday, where 20,000 Iraqis live, unable to return to their homes because of sectarian violence. 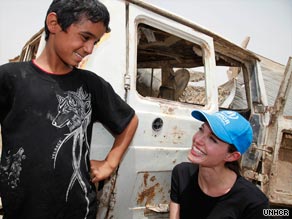 Jolie finds time to smile but the thousands living in the camps have only basic supplies.

"It is lacking in all of the basic things that you would need, they don't have," Jolie said. "They just started to have clean water. They're sleeping on dirt. They have built these areas out of brick by hand. They don't have job opportunities."

Jolie, on her third visit to Iraq as a U.N. High Commissioner for Refugees (UNHCR) Goodwill Ambassador, said she's seen some progress for these internally displaced Iraqis since she was last here in February 2008.

But in recent weeks the Iraqi government has taken on increased responsibility for controlling the violence that sent families from their homes, and U.S. troops have withdrawn from the cities.

"It is the most critical time," Jolie told CNN's Arwa Damon. "I think this will make the difference in the future of Iraq and in the future of a country that is so crucial to our world and our security and this region in the world. It is in the hands of the government to now really step up."

Jolie worries that the world's interest in the plight of Iraq's displaced millions is waning along with financial support.

"It's for all of us not to feel like 'Oh, let's move on.' There are so many other things that are grabbing our headlines," she said.

"This region of the world, the stability of this region is important to all of us," she said.

"There are still three million people displaced, innocent families," she added. "We have still many young men and women from our country who are fighting every day, there are men and women from all countries who have lost their lives, and this is a time to try to make some positive change."

Jolie said when she returns to Iraq in the future she hopes to see the families now in the settlement of Chikuk living in homes built on land they own with help from the UNHCR.

"The UNHCR has been doing everything it can," she said. "It's been building houses. It's having funding issues. It's only half-funded this year. It takes six months to be able to build a house.

"So they're not going to get enough money to be able to build all the houses that they want to build, to be able to facilitate anybody that does want to come home. They'll be able to do something, but not as much as they could if they were given all the support."