NEW YORK (CNN) -- If you're Iranian, you probably know both and Akbar Ganji and Googoosh. You also know that 30 years ago they had as much in common as Rush Limbaugh and Madonna. The story of how they came together this week on a street corner in Manhattan for a hunger strike is a glimpse of the evolution of the Islamic Revolution of 1979 and the far-reaching impact of Iran's current opposition movement. 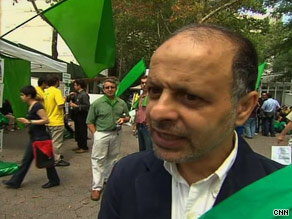 Akbar Ganji went on a three-day hunger strike this week outside the U.N. to protest Iran's crackdown on dissidents.

In 1979 no Iranian singer was more famous than Googoosh. She was Iran's Madonna, Sheryl Crow and Mariah Carey wrapped into one. She was rich, famous and adored by millions. Back then, the 29-year-old singer was also a symbol of an increasingly westernized Iran.

In 1979 Akbar Ganji was 19. He was a devout Muslim and staunch supporter of a religious movement to overthrow the western backed Shah of Iran. Ganji says he had Googoosh's records, but his religious mentors convinced him that her music was un-Islamic. So he tossed the records in the trash.

"All my friends did," Ganji said. "Back then everything had to be about the revolution."

In February 1979, Ganji's wish came true. The shah fell from power. In his place came the father of the Islamic revolution, Ayatollah Ruhollah Khomeini.

The two very different roads traveled by Googoosh and Ganji began to converge in the mid-1990s. That was when Ganji started becoming disillusioned with Iran's theocracy. This wasn't what he had in mind, he says, when he struggled for freedom and change in 1979. As a journalist he described Iran's leaders as fascists and dared to accuse high-ranking officials of murdering political dissidents.

In 2000, the government accused Ganji of being an enemy of the revolution and sentenced him to six years in prison. In 2005 Ganji went on a hunger strike. For 74 days he ate no food, surviving on water, tea and sugar cubes.

Ganji left Iran for the United States after he was released from prison in 2006. Soon after he arrived, he says, he got a call from the singer whose records he'd trashed more than 25 years before. Googoosh was already living in exile in the States.

"I don't want to go into details of what she said," Ganji said. "It was personal. She just wanted me to know that I was in her thoughts during my time in prison."

Watch Googoosh and Ganji talk about the hunger strike »

This week, Ganji welcomed Googoosh at a rally as they started a three-day hunger strike in support of Iran's opposition movement. Dozens of Iranian artists, authors and intellectuals living in exile joined them in the hunger strike in front of the United Nations' headquarters in Manhattan. Many were draped in green, the official color of the opposition movement that claims Iran's presidential elections were rigged.

The gathering called on the U.N. and the international community to help free the hundreds of detainees arrested by Iranian authorities after the disputed June 12 election. The names of the detainees were printed on a banner. The names in red were those who had been killed.

When Googoosh arrived on Wednesday, her fans mobbed her. One woman wrapped a green scarf around her shoulders.

"As an artist I have a voice, and I can ask the world to help our people," Googoosh told CNN.

Two Iranians with nothing in common 30 years ago now struggle for the same cause.

"No, I don't think anybody expected this," Ganji said.

The hunger strike ended Friday evening, and Ganji called it a success. He said the hunger strikers also vowed to oppose any future appearance at the United Nations by Iranian President Mahmoud Ahmadinejad.

"If he decides to come to the U.N., we have to bring 10 times as many people as we had this week to prevent him from making an appearance," Ganji said.