BAGHDAD, Iraq (CNN) -- At least 12 people have died in clashes between Iraqi police and members of an exiled Iranian opposition group at an Iraqi refugee camp, a group spokesman told CNN Friday. 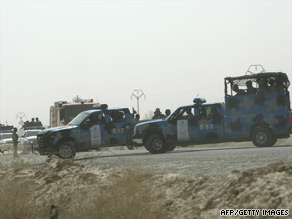 A police raid at Camp Ashraf in Diyala province Tuesday led to fighting with members of the group -- the People's Mujahedeen Organization of Iran. Along with the deaths, there have been reports of several hundred injuries.

The PMOI was allied with Saddam Hussein in Iraq during the 1980s with a goal of toppling the Iranian regime. But since Hussein's overthrow in 2003, Iraq has established good relations with the Iranian government.

Residents in the camp are concerned about being forcibly turned over to Iran. People there said they would be willing to go back to Iran but only if there are assurances its members won't be mistreated.

The PMOI official also said 35 people are missing, and there are fears that they were to be forcibly taken back to Iran.

The fighting is over now, and Iraqi police have control of the entrances to the camp and its intersections and streets. It also has control of the camp's power station and water purification plant, the PMOI official said.

Amnesty International, the human rights monitoring group, wants the Iraqi government "to investigate the apparent excessive use of force by its security forces."

The group said "armed security forces used bulldozers to force their way into the camp" and they "used tear gas, water cannons and batons against unarmed residents who tried to stop them from entering the camp."

The United States and Iran say the group is a terrorist organization.

Amnesty International said in most cases the "terrorist" designation pinned on the PMOI by most entities -- such as the European Union and other governments -- has been shelved because the group "no longer advocates or engages in armed opposition to the government of Iran."

Police believe the attacks were coordinated. The explosions, after Friday prayers had ended, appeared to target worshipers leaving the mosques.

The deadliest bombing occurred in the Shaab neighborhood of northern Baghdad, where 21 people were killed and 35 were wounded.

All About Iraq • Iran • Amnesty International