Protests in Iran as Ahmadinejad endorsed 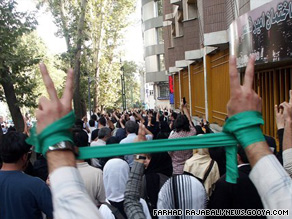 Crowds march in Tehran on Monday under the watchful eye of Iranian security forces.

Eyewitnesses and sources in the capital city said the crowds marched on the sidewalks around Vannak Square and Vali Asr Avenue, under the watchful eye of hundreds of Iranian security forces. Some chanted "Death to the dictator," while others said "God is great."

Security vehicles blocked many of the roads leading to Vannak Square, while riot police and members of the pro-government Basij militia patrolled the area on foot and on motorcycles.

One witness said he saw three people detained and taken away in a vehicle.

Ahmadinejad will be sworn in as president Wednesday in a ceremony to be held in parliament. The incumbent was declared the winner of the June 12 election with almost two-thirds of the vote.

The results, surprising to many Iranians and political analysts, prompted sometimes violent demonstrations across the country as thousands took to the streets to protest.

Former parliament speaker Mehdi Karrubi, who also ran against Ahmadinejad in June, addressed the protesters on Monday, according to Iran's state-run Fars News Agency. It said Karrubi delivered a speech at Vali Asr Street, where only about 100 people took part in the "illegal gathering."

Fars reported that Karrubi did not attend Monday's endorsement ceremony for Ahmadinejad.

Under Iran's constitution, the incoming president must receive the supreme leader's approval before being sworn into office. Ayatollah Ali Khamenei's endorsement is the first step in that process.

During the post-election demonstrations following the June 12 election, hundreds were detained, among them 50 "political figures" accused of playing key roles in the street demonstrations.

Nearly 100 Iranians arrested in the demonstrations that followed the June 12 election went on trial Saturday, and another 10 faced trial Sunday, according to Iranian media reports.

The Association of Teachers and Researchers of the Qom seminary school issued a statement Monday, calling the trials over the weekend "illegal and immoral." The statement was posted on Rouhanioon.com, the Web site of a group of top Iranian reformists called the Association of Combatant Clergy.

"Astonishingly, illegal and immoral trials took place, in which the essence of the laws was not observed," the statement from the school said.

The clerics say the trials lacked juries and that the detainees' attorneys and family members were not informed of them taking place. The statement said despite warnings from scholars, legal experts and senior clerics -- a handful of grand ayatollahs who are "sources of emulation" for many Shiite Muslims in Iran and abroad -- the trials were still allowed to go on.

"Therefore, this court, being in violation of religious laws and the constitution and civil rights, is illegal and void of any credibility," the statement said.

The trials have also come under fire from Moussavi and reformist former President Mohammad Khatami Sunday -- who accused the government of coercing confessions -- even as their critics threatened judicial actions.

Hojatoleslam Mohammad Taghi Rahbar, a member of parliament's Judicial Commission, on Sunday accused Moussavi and Khatami of being the main leaders of the recent disturbances.

Monday's statement is not the first time the seminary has spoken out against the hardline government of President Mahmoud Ahmadinejad, who was declared the overwhelming winner of the election. The group in Qom challenged the election results in a statement last month, calling the election skewed -- a significant strike against Iran's supreme leader, Ayatollah Ali Khamenei, who sided with the incumbent Ahmadinejad.

Several grand ayatollahs, including members of the Association of Combatant Clergy -- linked to Khatami -- have also voiced their concerns over the election and its subsequent fallout, saying the people's trust had been lost after the opposition was "met with brutality, beatings, indecency and incarcerations."