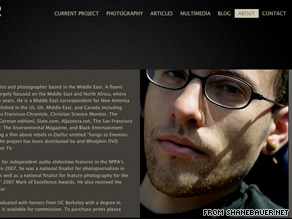 Shane Bauer is one of three American hikers taken into custody in Iran.

Shane Bauer, Sarah Shourd and Joshua Fattal -- three University of California-Berkeley graduates were arrested Friday after apparently crossing from Iraq into Iran during a hike -- are seasoned travelers with an appetite for interaction with other cultures, friends and associates said.

The pair had been staying in Damascus, Syria, but they and Fattal last week were in Iraqi Kurdistan, where Bauer was planning to report for NAM on presidential and parliamentary elections in the autonomous region, Close told CNN on Monday.

Iran's state-run media reported that Iranian security forces arrested the three Americans on Friday on charges of illegally entering the country from Iraq and that the matter is under investigation.

However, the Iranian foreign ministry hasn't confirmed that Iran is holding the Americans, U.S. State Department officials said. Secretary of State Hillary Clinton on Monday called on Iran "to help us determine the whereabouts of the three missing Americans and return them as quickly as possible."

Meckfessel is in the final year of a two-year program called MATESOL, or Masters of Arts in Teaching English to Speakers of Other Languages, according to the university.