JERUSALEM (CNN) -- Israel's foreign minister will resign from the post if he is indicted on corruption charges, he said Monday. 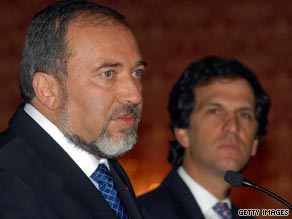 Israeli Foreign Minister Avigdor Lieberman, left, has been the focus of a corruption investigation.

Investigators "believe there is sufficient evidence to charge him with the crimes of bribery, fraud, obstruction of justice, harassing a witness, breach of trust and money laundering offenses," the police spokesman's office said in a statement.

The alleged crimes date back to before Lieberman became foreign minister earlier this year.

Over the years he has held various government posts. He is also the founder and leader of the controversial right-wing Yisrael Beiteinu political party.

Lieberman has repeatedly denied any wrongdoing.

"For 13 years the police have been persecuting me," he said in a statement Sunday, "and as my political power and the power of Yisrael Beiteinu grow, the attempts to remove me from public activity worsen. There was no real reason to begin the investigation, and if the suspicions were founded the investigation would not have taken over a decade."

Fraud investigators have repeatedly questioned Lieberman as part of the probe.

Allegations against him include receiving a bribe via his daughter's consulting firm. Investigators have questioned his daughter and lawyer.

Lieberman, a former bouncer, is a polarizing figure within Israel. His party has been accused of racism against Palestinians and Arab citizens of Israel.

He wants all members of Israel's parliament, the Knesset -- both Arabs and Jews -- to prove their loyalty by swearing allegiance to the Israeli flag and national anthem.

All About Israel • Avigdor Lieberman