LONDON, England (CNN) -- There was an "alarming spike" in the number of Iranian executions between the disputed June 12 presidential election and Wednesday's inauguration of Mahmoud Ahmadinejad for a second term, Amnesty International reported Friday. 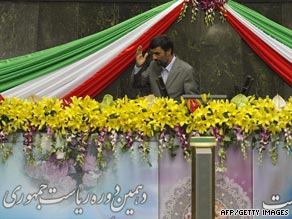 Iranian President Mahmoud Ahmadinejad was sworn in for a second term Wednesday.

"In just over 50 days, we recorded no less that 115 executions. That is an average of more than two each day," said Irene Khan, secretary-general of the human rights watchdog.

"This represents a significant increase, even compared to the appallingly high rate of executions that has been so long a feature of the human rights scene in Iran," Khan said in Amnesty International's report.

A representative of the Iranian government could not immediately be reached for comment.

An Iranian state broadcaster recently reported that senior officials had approved the death sentences of 24 drug smugglers who were reportedly hanged in the city of Karaj. That report quoted a wire service story saying that 219 people had been executed in Iran this year.

The government is trying more than 100 people arrested after the balloting.

Between January 1 and June 12, Amnesty International said it recorded at least 196 executions, making Iran a global second behind China for the number of such deaths. There were 115 executions between the election and the inauguration.

"In recent weeks, world attention has understandably been focused on the Tehran authorities' brutal attempts to suppress the mass and largely peaceful protests," Khan said. "Yet, as these grotesque figures show, there has been no let-up in other long-standing patterns of human rights abuse -- in fact, the reverse."

Amnesty International said the true total number of executions is "almost certainly higher," explaining that its numbers come from official Iranian media and other sources.

"This is a dreadful situation, and one that is made worse by the fact that all or most of those executed are likely to have been denied fair trials, in gross breach of international law," Khan said.

On Thursday, U.S. Secretary of State Hillary Clinton called the trial of more than 100 people whom Iran has linked to post-election unrest a "sign of weakness" that shows the Islamic republic "is afraid of its own people."

"It is a show trial, there's no doubt about it," Clinton told CNN's Fareed Zakaria in a wide-ranging interview to be broadcast on his "GPS" program Sunday.

Also in Iran, free-press advocates are criticizing the nation for closing a journalists' association and detaining three more journalists.

Iranian authorities closed the Association of Iranian Journalists this week and arrested three journalists, the Committee to Protect Journalists said in a statement.

"The closure of the Association of Iranian Journalists is the latest attempt to intimidate and silence critical journalists," the organization's coordinator for Middle East and North African programs, Mohamed Abdel Dayem, said in a statement.

The association was closed Wednesday night, according to the semi-official Iran Labour News Agency, which quoted the association's secretary, Badrolsadat Mofidi.

Meanwhile, agents arrested an editor for a newspaper owned by Mehdi Karrubi, an opposition presidential candidate, the committee said. The arrest happened not long after Ahmadinejad was sworn in Wednesday, the organization said.

At least 38 journalists are behind bars in Iran, making that country the world's leading jailer of journalists, the committee said.