TEHRAN, Iran (CNN) -- A senior official with Iran's powerful Revolutionary Guard is calling for the prosecution of two key opposition leaders and a former president, accusing them of fanning the protests that have gripped the nation since its disputed presidential election two months ago. 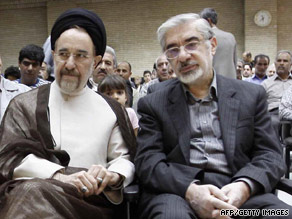 Opposition leaders Mir Hossein Moussavi and Mehdi Karrubi, along with former reformist President Mohammad Khatami, should be tried for attempting to lead a Western-backed "velvet revolution" that aimed to topple the regime, the official said.

"If Moussavi, Khatami ... and Karrubi are the main suspects believed to have been behind the velvet coup in Iran, which they are, we expect the judiciary to go after them, arrest them, put them on trial and punish them according to the law," said Brigadier General Yadollah Javani.

Javani heads the Guard's political bureau. The Guard, which was initially created to protect the leaders of the revolution, is under the direct control of Iran's supreme leader and enforces the governments' Islamic codes and morality.

His comments were reported Monday by the state-run Islamic Republic News Agency.

A day earlier, state-run Press TV reported that lawmakers were working on a complaint to present to the parliament's National Security Commission to bring Moussavi to trial for fomenting the post-election unrest.

Until now, the government has gone after the protesters themselves in mass trials that have been denounced internationally. Among those appearing in court are two French and British embassy employees and a French citizen.

Iran says many of the defendants have confessed to helping foreign countries -- specifically Britain and the United States -- "instigate the unrest."

Moussavi and Khatami have contended the detainees were forced into confessions through torture.

Human rights organizations have also decried the mass trial, calling it a farce and a way to intimidate Iranians who speak out against the government.

Moussavi and Karrubi ran in the presidential election on June 12, in which hardline incumbent President Mahmoud Ahmadinejad was declared the overwhelming winner.

Hundreds of thousands of Iranians took to the streets to protest, calling the election results fraudulent, and more than 1,000 people were arrested. Iran said at least 30 people were killed in post-election violence.

The two opposition leaders unsuccessfully challenged the results for weeks, and Ahmadinejad was sworn in for his second term last week.