Report: Six arrested in al Qaeda plot on U.S. base in Kuwait 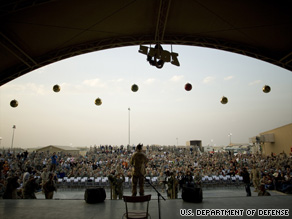 Troops at Camp Arifjan in Kuwait gather for a 2007 holiday show.

The suspects had planned to bomb Camp Arifjan during the upcoming Muslim holy month of Ramadan, Kuwaiti security sources said.

It is unclear when the arrests took place.

Camp Arifjan, outside Kuwait City near the country's border with Saudi Arabia, is used as a logistical base and transit point for U.S. troops deploying to and from neighboring Iraq, according to the U.S. Defense Department.

"... Kuwait has been an outstanding host for the United States armed forces. This is evidence of the strong U.S.-Kuwait partnership against al Qaeda."

The U.S. military had no further information.

"The operation was a Kuwaiti-led one, and so the Kuwaitis have the details on the intel and the people they apprehended," said Navy Capt. Jack Hanzlik, a spokesman for U.S. Central Command.

The plot also involved an attack on Kuwait's State Security Service headquarters and other government facilities, according to the Kuwait News Agency, which cited a statement from the Interior Ministry.

An investigation into the alleged plot is ongoing, the news agency reported.

Two suspects confessed Tuesday that they planned to attack Camp Arifjan with an explosives-laden truck during Ramadan, which begins August 21, the security sources said.

The other four suspects will be interrogated Wednesday, the sources said.

Camp Arifjan is the forward headquarters for the U.S. Army Central Command in the region. It is a major logistics base for the U.S. military and generally houses thousands of American troops.

Most of the troops stationed there are a component of the 3rd U.S. Army, which is headquartered in Fort McPherson in Atlanta, Georgia, and supports U.S. Central Command missions in the Mideast, including Iraq and Afghanistan, according to the U.S. military.

"We take the security situation at the base and force protection very seriously and coordinate closely with the Kuwaiti government on the security of our bases," said Army Sgt. Major Brian Thomas, an Atlanta-based spokesman for Central Command.

All About Al Qaeda • Kuwait