TEHRAN, Iran (CNN) -- Iran's influential parliament speaker has called for an investigation into allegations that post-election detainees were raped while in custody, state-run media said. 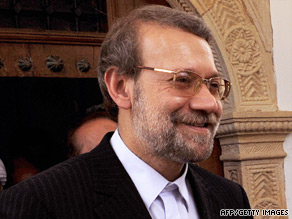 Ali Larijani said a parliamentary probe should examine whether jail rape allegations were true or false.

Ali Larijani said that a special parliamentary panel "had carried out investigations into the situation in [Iranian] jails and the treatment of detainees and it should also look into whether jail rape allegations are true or false," Press TV reported, citing Tabnak, a Web site associated with opposition politician Mohsen Rezaie.

Meanwhile, Iran's Intelligence Ministry, the government body that keeps tabs on political dissenters, warned the media against revealing what it called "classified data" after reports Monday that Ahmadinejad had purged four senior intelligence officials, according to Press TV.

The ministry said in a statement that publishing "false news" could result in exposing vital "documents, identities of personnel, internal structure" -- pertaining to the Intelligence Ministry, Press TV reported.

"This subject is among classified material and it is obligatory for all individuals, and especially media supervisors, newspapers, Web sites to refrain from publishing such reports," the statement said, adding that the government would pursue prosecution of those who failed to heed the warning.

In the aftermath of the election, the media has repeatedly reported on the shuffles within the Intelligence Ministry, including Ahmadinejad's firing of former Minister Gholam Hossein Mohseni Ejei, which drew the ire of Iran's conservatives.

Incidents such as the firings of senior officials have exposed rifts within Iran's ruling elite that began surfacing in the aftermath of the controversial presidential election on June 12 in which Ahmadinejad was officially declared the winner. Thousands of Iranians took to the streets to protest and a brutal crackdown by security forces followed.

At least 30 people died in the violence and more than 1,000 people were arrested.

The call for an investigation of the alleged abuse of those arrested comes on the heels of a letter written by another opposition candidate, Mehdi Karroubi, to the powerful former president of Iran, Ali Akbar Hashemi Rafsanjani.

Karrubi informed Rafsanjani that a number of detainees had claimed that several women and men, arrested over the course of post-election protests, were sexually assaulted by their jailers. Karrubi asked Rafsanjani to approve an "impartial committee" to "investigate these tragedies with transparency until they are resolved."

"Young boys held in detention have also been savagely raped," Karrubi said, adding that they were suffering from depression and serious physical injuries after the alleged attacks.

Rafsanjani was to have delivered this week's Friday sermon but announced he would not be doing so.

Rafsanjani backed Ahmadinejad's chief rival Mir Hossein Moussavi in the election and is reported to have fired some bodyguards who said they voted for Ahmadinejad.

Rafsanjani -- now head of the Assembly of Experts, the council responsible for appointing or removing the supreme leader -- called for the release of post-election detainees during a highly anticipated July 17 sermon at Friday prayers.

Iran has put on trial some 100 politicians, journalists and activists accused of involvement in the alleged post-election revolution while the treatment of detainees in Iran's prisons has become an increasingly high-profile issue, with human-rights groups accusing guards of conducting harsh interrogations, beatings, sleep deprivation, and threats of torture to coerce false confessions.

Iranian media have reported that Ayatollah Ali Khamenei, Iran's supreme leader, has ordered one prison, Kahrizak, shut down amid reports it did not measure up to the required standards. Kahrizak's chief was fired and arrested over allegations of detainee mistreatment, according to local reports.

Separately, a top general with Iran's powerful Revolutionary Guard is calling for Karrubi and Mousasvi to be prosecuted, alongside former president Mohammed Khatami, accusing them of fanning the protests that have gripped the nation.

They should be tried for attempting to lead a Western-backed "velvet revolution" that aimed to topple the regime, the official said.