JERUSALEM (CNN) -- Senior members of the Palestinian Fatah party appear to have suffered a serious upset in a vote to determine the party's key decision-making body. 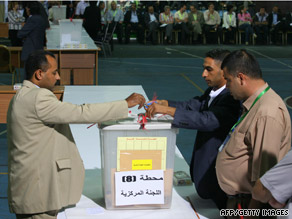 Fatah officials count ballots after a vote for the party leadership in Bethlehem on Monday.

Fatah party members voted among 18 candidates who are vying for seats on the Central Committee, the party's highest decision-making body. Final results will be released later on Tuesday, the last day of the party's weeklong conference -- its first in 20 years.

Unofficial results show a major upheaval of Fatah's old guard. One shock is the apparent ousting from the committee of former Palestinian Prime Minister Ahmed Qorei, who is the head of the Palestinian negotiating team and a key member of Fatah in the West Bank.

"People want new faces, a new spirit with more energy and with more strength, because we have a very long struggle ahead," Fayez al-Saka, a Fatah member of the Palestinian Legislative Council, told CNN in the West Bank city of Bethlehem.

Based on the initial results, new committee members include imprisoned politician and militant leader Marwan Barghouti, who is serving several life sentences in an Israeli prison on charges of killing an Israeli civilian and attacking Israeli soldiers.

The unofficial results show a thin margin of victory for at least two positions on the committee, meaning there may have to be a recount.

Hamas -- the militant Palestinian Islamist movement that controls Gaza -- warned the new leadership not to repeat the "mistakes" of their predecessors.

"The newly elected Fatah leadership will be weighed on its adherence to the rights of the Palestinian people, the steadfastness, unity, resistance and commitment to end the strife within the Palestinian rivalry," Hamas spokesman Fawzi Barhoum said.

Hamas has long accused Fatah and its leaders in the West Bank city of Ramallah of holding and imprisoning Hamas members inside Palestinian Authority prisons.

CNN's Kareem Khadder in Jerusalem contributed to this report.

All About Palestinian Politics • Fatah Organization