At least 20 killed in Iraq blast 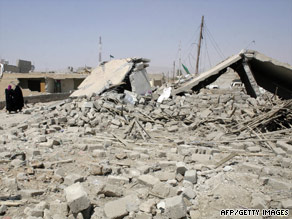 Houses are left in ruins earlier this week after truck bombings in the northern Iraqi village of al-Khazna.

Two suicide bombers with explosive vests carried out the attack at a cafe in Sinjar, a town west of Mosul.

Later Thursday, two people were killed and 13 were wounded in a motorcycle bombing in a predominantly Shiite neighborhood of southern Baghdad, an Interior Ministry official said.

In Sinjar, many townspeople are members of the Yazidi minority, an ancient religious sect that has been the target of previous attacks in Iraq.

In August 2007, More than 400 people died and at least 300 were injured when suicide truck bombers struck predominantly Yazidi villages, a series of attacks that rank among the deadliest in Iraq's ongoing violence.

The Yazidi sect is a mainly Kurdish minority, an ancient group that worships seven angels, in the form of peacocks, who its followers believe are subordinate to the supreme god who created the universe.

Thursday's attack is at least the second this week apparently targeting ethnic minorities in northern Iraq.

CNN's Yousif Bassil in Baghdad contributed to this report.