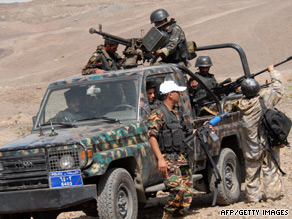 Yemeni security forces have been fighting against rebels in the north and south.

According to SABA, the government's demands include removing check points, ending banditry and destructive acts, handing over all military equipment and weapons and offering information on the fate of six kidnapped Europeans who disappeared in June.

The announcement of cease-fire conditions by Yemen's Supreme Security Committee comes only days after Yemeni forces began an offensive against the Houthi rebels in the northern mountainous province of Saada, which is on the Yemeni border with Saudi Arabia.

It follows one day after a state of emergency was declared in all regions of Saada Province by the Saada Local Council.

Thursday, citing official sources, Yemen Post reported that, over a five-year period of sporadic battles between Yemeni forces and Houthi rebels, over 1,000 government soldiers have died and over 6,000 have been injured.

According to Yemen Post, "it is said that thousands of civilians and Houthi's followers died in the same period, but the real number is unspecified."

Yemen's government and Houthi rebels have been involved in intermittent fighting since 2004. The conflict is believed to be both separatist -- over who will have power in the area -- and sectarian -- whether Shia Islam will dominate even though the majority of Yemenis are Sunni.

Yemen's President Ali Abdullah Saleh is also faced with a separatist movement in the country's south and a growing threat from al Qaeda.

Al-Qaeda's presence in Yemen has been a growing concern for the United States. In late July, Gen. David Petraeus, CENTCOM Commander, and an accompanying delegation, flew to Yemen and met with Saleh. According to SABA, one of the topics of discussion was how to better combat terrorism.

Nine foreigners were abducted in June while apparently on a picnic in Saada Province. The bodies of three of them, a South Korean teacher and two German nurses were discovered. Five Germans, including three children and a Briton, are still missing and their status is unknown.

It is still unclear who is behind the kidnapping. Initial official statements said the group was apparently seized by Houthi rebels. However, Yemen's news agency later reported Houthi rebels accused drug cartels of abducting the group and killing the three. In addition, SABA said a spokesman for the rebels accused regional tribes of being behind the kidnappings and slayings.

The incident was the latest in a string of kidnappings of foreign workers in Yemen this year. All of the previous hostages had been released unharmed, including 24 medical workers seized in Yemen's Amran province.

In March, four South Korean tourists were killed in the city of Al Shibam when a bomb exploded as they were taking pictures.

In January, two female Belgian tourists and a Yemeni driver were killed by gunmen while the three were traveling in a convoy in Al Shibam.

All About Al Qaeda • Yemen