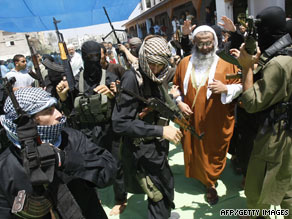 The clashes ended after several hours, after Hamas forces blew up the home of Sheikh Abu al-Nour al-Maqdessi, leader of the Salafist jihadist group Jund Ansar Allah, or Soldiers of the Partisans of God, the sources said.

Al-Maqdessi escaped, they said, and Hamas security forces were searching for him.

The clashes were the latest between Gaza's Hamas rulers, who have said they are moderate Muslims pledged to the Palestinian cause, and more radical Islamic groups.

In a televised statement, Hamas ministry spokesman Taher Nunu called al-Maqdessi's group "outlaws" and said they have been "terrorizing the country and attacking civilians."

"We hold the group and its leader fully responsible for what is happening in Gaza, and we offer our condolences to everyone who was killed during the clashes," Nunu said. "No one is above the law, and we urge everyone who is a member of this group to surrender himself to the authorities, or they will be accountable for all of their actions."

The gunfighting erupted near a mosque in the southern Gaza city of Rafah, where the cleric delivered his sermon, the sources said. Hamas militants raided the mosque and seized control of it.

Later, the fighting spread to al-Maqdessi's home, the sources said.

The fighting has left at least 13 dead and more than 100 wounded, the sources said.

Al-Maqdessi also called for a public meeting at the mosque, posting on Jund Ansar Allah's Web site an invitation dubbed "the golden advice to the government of [Hamas leader] Ismail Haniya."

The group posted a statement on the site announcing the establishment of the Islamic emirate in Gaza and proclaiming al-Maqdessi "the commander of the faithful." The statement declared that armed forces in Gaza should unite under him.

The statement urged Muslims everywhere to support the "young emirate" and provide the group with money, weapons and men because "this is the hope of the Muslim nation in raising the banner of monotheism in Palestine and to liberate all the lands and purify Al-Aqsa mosque from the filth of the damned Jews."

Al-Aqsa mosque is in Jerusalem.

The group accused Hamas of not being Islamic enough, saying Hamas cares more about pleasing "tyrants" than "obeying God."

But Hamas spokesman Sami Abu Zahri dismissed statements about the establishment of an Islamic emirate as "theoretical."

"It is not permitted to any party or individual to enforce their own laws, because this is the responsibility of the security forces," he said.

Salafi is the term used to describe the radical islamist movement that follows the doctrines of the "Salaf," or the predecessors, referring to the early generations of Muslims. The movement rejects all modern influences such as politics and government.

CNN's Talal Abu-Rahman in Gaza City contributed to this report.

All About Gaza • Hamas • Rafah