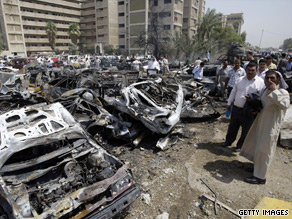 People gather outside the Iraqi Foreign Ministry on Wednesday in a residential area in Baghdad.

The six explosions marked the country's deadliest day since the United States pulled its combat troops from Iraqi cities and towns nearly two months ago and left security in the hands of the Iraqis.

In one attack, a truck bomb exploded outside the Ministry of Foreign Affairs. The blast blew through the front of the building, sending some vehicles flying and leaving others in mangled twists of metal in the area, which is just outside the restricted International Zone, also known as the Green Zone.

Nearby, Iraqi security forces stood with shocked expressions as ambulances screamed past.

Another truck bomb went off outside the Ministry of Finance building.

In central Baghdad, a roadside bomb exploded on Kifa Street, and another bomb exploded in the Salhiya neighborhood, where on Tuesday security forces had avoided injuries by successfully defusing a truck bomb. Wednesday's other two bombs exploded in eastern Baghdad's Beirut Square, officials said.

"The terrorism attacks that took place today require, without a doubt, the re-evaluation of our plans and our security mechanisms to face the challenges of terrorism," Iraqi Prime Minister Nuri al-Maliki said in a written statement.

"The horrific injuries and loss of life witnessed in Baghdad today are terrorist attacks that serve no legitimate purpose," they said.

The attacks "will not deter Iraqis from continuing their efforts to build a peaceful and prosperous society and engage the international community, nor will they weaken our resolve to help them in their efforts," they added.

Two people believed to be connected to the bombings have been arrested, an official with the Iraqi army told CNN.

The two suspects were driving in a car rigged with explosives before they were arrested by Iraqi Security Forces, the official said.

The two suspects were believed to be al Qaeda in Iraq senior leaders, the official said.

The United States pulled its combat troops from Iraqi cities and towns on June 30, leaving security responsibilities to the Iraqis. The U.S. military remains in a training and advisory capacity in those areas and continues to conduct combat operations outside cities and towns.

Since then, al-Maliki has ordered his government to remove the concrete blast walls that line Baghdad's streets and surround whole neighborhoods.

The order does not cover the Green Zone -- which houses Iraqi government buildings and the U.S. Embassy -- or military installations, government institutions, hotels and some private companies.

The government has also removed some checkpoints, including one on the road where the bombing near the Ministry of Foreign Affairs occurred. That checkpoint had contained bomb-detection equipment.

Major incidents of violence in Iraq since 2008 include:

CNN's Arwa Damon and Mohammed Tawfeeq contributed to this report.