Security stepped up after Baghdad bombings 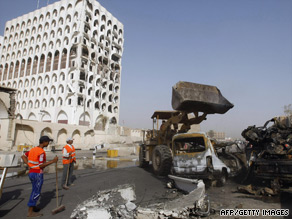 Workers clear up the site outside the ministries of finance and foreign affairs in Baghdad.

Iraqi state television also reported that the presidency of Iraq's parliament has called for an emergency session among the heads of parliamentary blocs and the parliamentary defense and security committee on Friday to discuss the security situation.

Iraqi lawmakers are on a one-month vacation.

"They are in charge of security in Salhiya and Bab Muadham, two areas of Baghdad targeted in the bombings," Atta said.

Thursday's events follow a late-night meeting that included al-Maliki and Iraq's defense, interior and national security ministers, along with senior representatives from the military and intelligence service.

At least two people were killed Thursday morning when a bicycle rigged with explosives exploded in the Hafdh al-Qadhi commercial area in central Baghdad.

In Babil province, south of Baghdad, at least four people were also killed and 76 were wounded Thursday in a string of bombings, an Iraqi Interior Ministry official said.

Wednesday's bombings marked the country's most fatal day since the United States pulled its combat troops from Iraqi cities and towns nearly two months ago and left security in the hands of the Iraqis.

In one attack, a truck bomb exploded outside the Ministry of Foreign Affairs. The blast blew through the front of the building, sending some vehicles flying and leaving others in mangled twists of metal in the area, which is just outside the restricted International Zone, also known as the Green Zone.

Another truck bomb went off outside the Ministry of Finance building and, in central Baghdad, a roadside bomb exploded on Kifa Street.

A bomb also exploded in the Salhiya neighborhood, where on Tuesday security forces had avoided injuries by successfully defusing a truck bomb.

Two people believed to be connected to the bombings have been arrested, an official with the Iraqi army told CNN on Wednesday.

The United States pulled its combat troops from Iraqi cities and towns on June 30, leaving security responsibilities to the Iraqis but remaining in a training and advisory capacity. The U.S. military continues to conduct combat operations in areas outside cities and towns.

Since then, al-Maliki has ordered his government to remove the concrete blast walls that line Baghdad's streets and surround whole neighborhoods.

The order does not cover the Green Zone, which houses Iraqi government buildings and the U.S. Embassy, military installations, government institutions, hotels and some private companies.

Following the bombings, the U.S. commander in charge of training Iraqi security forces said he was frustrated with how much remains to be done.

"Clearly, there was a lapse of security or this would not have happened." said Lt. Gen. Frank Helmick, commander of Multi-National Security Transition Command-Iraq, which is training Iraqi security forces.

He said he is experiencing "personal frustration with where we are today" regarding the training of Iraqi troops. Supporting Iraqi forces in the field is a challenge, he said, because many logistical and personnel issues plague the forces.

"It's very, very difficult, and it takes time," he said, "to build an intelligence, surveillance and reconnaissance technician, to build platforms for the Iraqis -- in other words, airplanes with qualified crews, Iraqi crews that can fly them and analyze the data."

U.S. forces will "really have to focus on and accelerate" the pace of training through next year, he told reporters at the Pentagon via video conference from Iraq.

Major incidents of violence in Iraq since 2008 include: