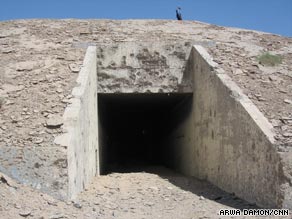 The entrance to the bunker complex where al Qaeda terrorized enemies in Iraq.

We are standing in the middle of what was an al Qaeda execution site, just outside an intricate bunker complex that the organization used to torture and murder its victims, the bodies left to rot or be eaten by animals.

From the back of the police truck the opening to the first bunker is barely discernible in the distance.

"Al Qaeda came in as a massive force" one of the officers says as we bump along the harsh terrain. "They stole our cars, our personal cars. They kidnapped two of my brothers. They blew up the house over there."

In the distance we can see his village -- a set of sand colored homes surrounded by parched farmlands.

As we approach grubby children chase the truck and then stand to the side, despondent, as the officer points to their home. "Their father was killed by al Qaeda," he says.

In 2007 the U.S. military launched a series of airstrikes that drove out al Qaeda.

As we enter the first bunker Captain Khaled Bandar tells us they found the floor littered with bodies.

A gaping hole is evidence of the U.S. firepower. Insurgents used the layered and intricate labyrinth of passageways and hatches to carry out summary trials and executions.

The police show us clothing and shoes, saying they are leaving them in place in case the families of the victims decide to come back. The stench of decay still lingers.

Al Qaeda has been on the defensive in recent years, notwithstanding spectacular attacks attributed to the group like last week's blasts in the capital, including suicide truck bomb attacks on the ministries of foreign affairs and finance. At least 100 people were killed and more than 500 wounded.

But the concerted security campaign against the group has forced it to change its structure and strategy.

According to one man who has close connections to al Qaeda in Iraq and asked not to be identified, the group lost support because it lost the protection of the people.

"There is an old saying about the basics of war. Whoever wins the people wins the war. So when al Qaeda didn't win the people over, it lost its battles," he explains.

"Al Qaeda's strategy of taking control of areas has been abandoned for now. Their method is propaganda, instilling fear, terrorizing."

He adds that the group stopped recruiting over the last six months because of a shortage in funding and increased infiltration.

"Al Qaeda is moving towards selecting the elite and condensing its forces rather than expanding. The Americans nearly defeated al Qaeda by cornering it and reducing its operations," he says.

But those operations are still deadly, and the war is by no means over. "No, the war is not over in Iraq, a type of battle is over, but there are new battles cloaked in politics.

And al Qaeda is still able to send a message to those who dare oppose them.

The police officers show us blood stains in the desert near the bunkers and tell us how they found two beheaded bodies just a month ago. They were identified as being the brothers of two police officers from another city, Ramadi.

Meanwhile, al Qaeda's global war has sifted to a place it believes it can still win -- Afghanistan.

"Al Qaeda in Afghanistan is made up of true believers, those who believe in jihad and fighting, and that's why they joined," the man with connections says. "As for most of al Qaeda in Iraq's members, they are just looking to benefit themselves, or they join out of resentment for a certain sect or to avenge their families."

As for Iraq's longterm stability, that very much still hangs in the balance. He says: "Peace will not be achieved by a magic wand or the rhetoric of a politician. Peace will be accomplished through the will of the Iraqi youth. We have to wait for this generation to change ... so that a generation that hates (the violence) will emerge."

Yousif Bassil and Jomana Karadsheh contributed to this report