BAGHDAD, Iraq (CNN) -- Ramadan, the holy month of Islam, began Saturday with Iraqis hoping for tranquility but fearful after recent attacks that have shaken the country. 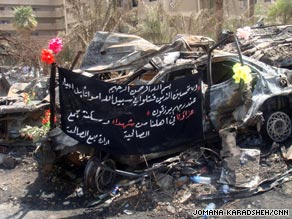 Plastic flowers and banners hang on cars destroyed in Wednesday's bombings in Baghdad.

The prime minister said that as he congratulates Iraqis, his "heart is full of sadness and sorrow."

Four Iraqi soldiers and a government worker were killed Saturday in attacks in Baghdad and Mosul, according to an official of the Interior Ministry.

Gunmen opened fire earlier in the day on an army checkpoint in the Sunni neighborhood of Adhamiya in northeastern Baghdad, killing two soldiers and wounding one. Two more soldiers died and two were wounded when a roadside bomb exploded near an Iraqi army patrol in Zummar, about 50 miles northwest of Mosul. Mosul is 260 miles north of Baghdad.

A bomb left inside the district manager's office in the Qahira neighborhood in eastern Mosul killed the manager and two children.

A roadside bomb also exploded near a car and wounded two people in the Saidiya district of southeastern Baghdad.

The holy month of Ramadan, considered to be a time of peace and giving, is when Muslims across the world fast from dawn until dusk, and its observance is one of the five pillars of Islam.

But since the start of the war, Iraqis every year brace for an uptick in violence during the holy month. Some years have seen a rise in suicide attacks.

Extremist attacks during Ramadan are sometimes "fueled by a belief that to carry out violence -- 'jihad,' a suicide bombing -- during a holy month such as this one will gain them more credibility with the Lord," said CNN Correspondent Arwa Damon in Baghdad.

Ramadan "is meant to be a time to show one's devotion to God, a time of sacrifice," said Damon, "Unfortunately, even though it is very much intended to be a time of peace ... it has proven over the last few years in places like here in Iraq to be a time of increased violence."

On Wednesday, more than 100 people were killed and more than 500 were wounded in a series of truck bombings in Baghdad. It was the deadliest day since the United States pulled its combat troops from Iraqi cities and towns nearly two months ago and left security in the hands of the Iraqis.

At least four people were killed and 76 were wounded Thursday in a string of bombings in Babil province, according to the Iraqi government.

It is not just Iraq where extremists see Ramadan as a time of opportunity.

All About Iraq • Nuri al-Maliki