BAGHDAD, Iraq (CNN) -- Iraqi officials Sunday released what they called a confession from a man identified as a former Baathist police official, who says he helped organize one of last week's attacks on government buildings in Baghdad. 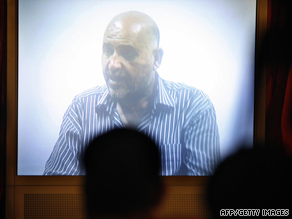 In the videotaped statement, the man identified himself as Wissam Ali Kadhim Ibrahim, a former police chief in executed dictator Saddam Hussein's government. Ibrahim said he received orders for the bombing of the Finance Ministry building from a member of Hussein's Baath Party now living in Syria.

The release of the confession came as Iraqi authorities investigate whether members of the country's security forces collaborated in Wednesday's attacks. Iraq's security forces have come under sharp criticism for failing to prevent the bombings, which have raised doubts about the capabilities and allegiances of Iraq's army and police.

Wednesday's suicide truck bombings at the Finance Ministry and the Foreign Ministry, as well as three other blasts, killed at least 100 people and wounded hundreds of others. It was the bloodiest day in the Iraqi capital since U.S. troops withdrew from Iraqi cities at the end of June.

Ibrahim's statement did not mention the use of trucks or the bombing at the Foreign Ministry, Wednesday's other major attack. In his statement, which was played for reporters and aired on Iraqi television, the well-dressed 57-year-old said he received orders from Sattam Farhan, who he said was a Baath Party leader in Syria. The goal of the attack was "to destabilize the regime," Ibrahim said.

Some midlevel and senior members of the Baath Party sought refuge in Syria following the U.S. invasion that ousted Hussein in 2003. Iraqi Prime Minister Nuri al-Maliki asked for the handover of some of those ex-officials during a visit to Damascus last week, Iraqi officials said.

Ibrahim spoke calmly and conversationally as he described his involvement in one the deadliest bombings in Iraq this year. He said the vehicle used in the bombing was put together in the town of Khalis, northeast of Baghdad, and said $10,000 was paid to a man who facilitated the passage of the vehicle through checkpoints from Diyala province -- where Ibrahim was once a town police chief, officials said -- to Baghdad.

Thursday, Iraqi officials announced announced that 11 senior officials in charge of security around the Foreign and Finance Ministries had been detained for questioning. Several members of the security forces who manned checkpoints between Diyala and Baghdad on the day of the attacks have been detained as part of the probe, the state broadcaster al-Iraqiya reported Sunday, citing unnamed security officials.

Maj. Gen. Qassim Atta, a spokesman for the Baghdad Operations Command, announced Friday that members of an insurgent cell behind the bombings had been arrested within two hours of the attacks. Initial investigations showed a link between the cell and the ousted Baath regime, he said.

But many Iraqis expressed skepticism about the claims to CNN, asking why the government had the intelligence to make the arrests so quickly but was unable to prevent the attacks.

In some previous incidents, the Iraqi government has announced arrests and aired confessions that did not hold up.

Last week's bombings fueled concerns that the sectarian warfare that ravaged Iraq in 2006 and 2007 could return following the U.S. pullback.

In a televised address Saturday, al-Maliki defended the security forces and blamed an alliance of the Baath Party and al Qaeda for Wednesday's bombings. Al-Maliki vowed to punish those responsible or who may have collaborated.

"We have taken decisive steps and measures to deal with the weaknesses and failures the terrorists used to carry out their crime," he said. "We will punish anyone who proves to have collaborated or failed to stop these crimes."