(CNN) -- They have dismissed him, attempted to silence him and threatened him with arrest. 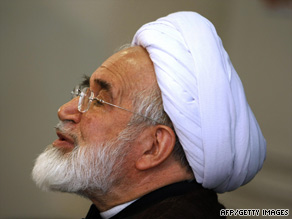 But Iran's Islamic hardliners so far have failed to stifle opposition leader Mehdi Karrubi's claims that post-election detainees have been abused -- some even raped -- behind bars.

Actually, the 72-year-old cleric has grown increasingly defiant in recent weeks. His latest move: going public with a first-hand account from a detainee who says he was raped in a Tehran prison.

"I was in prison, blindfolded and tied down. They beat me almost to death and did the most despicable thing to me, which is rejected even by all infidels and idol worshipers and I only had the courage to make Mr. Karrubi aware of this," the unidentified male says in a statement posted Monday on Karrubi's party Web site.

The male says he spoke to Karrubi after his release and "I was convinced that if someone is raped -- while his hands and feet are tied and he has not powers to defend himself -- not only has he not committed a sin, but he has been victimized."

The statement alleges incidents of sexual abuse in Kahrizak prison, which has since been ordered closed by the supreme leader of Iran. The male says he was subjected to humiliating questions by judiciary officials as recently as Thursday.

Karrubi said the man's account is the tip of the iceberg, and that he will continue posting accounts on the Web site if "the current trend continues."

Iranian government officials could not be reached late Monday. However, the government this month firmly denied Karrubi's rape allegations, dismissing them as lies.

Karrubi, a former parliamentary speaker, has since been scorned by government hardliners, whose credibility and legitimacy have been publicly questioned in the aftermath of the election.

Allegations of the torture, abuse and rape of post-election detainees have forced the Islamic regime to respond to behavior inside prisons that has been compared to the abuse of political prisoners under the regime of the Shah of Iran, who was overthrown by the Islamic Revolution in 1979.

Karrubi's claims have sparked outrage from human rights groups, including Amnesty International, which have called on Iran's Supreme Leader Ali Khamenei to authorize an independent inquiry and allow international experts to participate in the investigation.

Khamenei hasn't taken up their offer. However, Iran's powerful conservative parliamentary speaker, Ali Larijani, said a special committee of Iran's parliament, or Majlis, conducted a "precise and comprehensive inquiry" into the treatment at Tehran's Evin and Kahrizak prisons, and found "no cases of rape or sexual abuse," government-funded Press TV has reported.

Still, on Monday the special parliamentary committee agreed to review Karrubi's evidence and meet with four individuals who say they were tortured and raped while in prison, according to the Web site of Karrubi's Etemad-e Melli (National Trust) party.

"But if we determine that these were purely fabricated allegations in order to serve against the benefit of the system, we will also subject the perpetrators of such lies to prosecution," said Kazem Jalili, the head of the committee, according to the Web site.

Such threats aren't new for Karrubi.

"If such a person has made such accusations that have infuriated the people and it is shown that he cannot prove them, then legal steps must be taken with regards to this person," said Gov. Morteza Tamaddon, according to the Iran Labor News Agency.

Ayatollah Hossein Taeeb, commander of the Basij militia, which attacked protesters during the unrest that followed the election, has allegedly called for Karrubi to be flogged 80 times. CNN could not independently confirm Taeeb's remark, which was posted on the Web site of the reformist Etemad-e Melli newspaper.

That newspaper, which is aligned with Karrubi, was shut down by Iranian authorities on August 16 for publishing "unlawful and criminal material," state-run media reported, though details about the materials in question were not revealed.